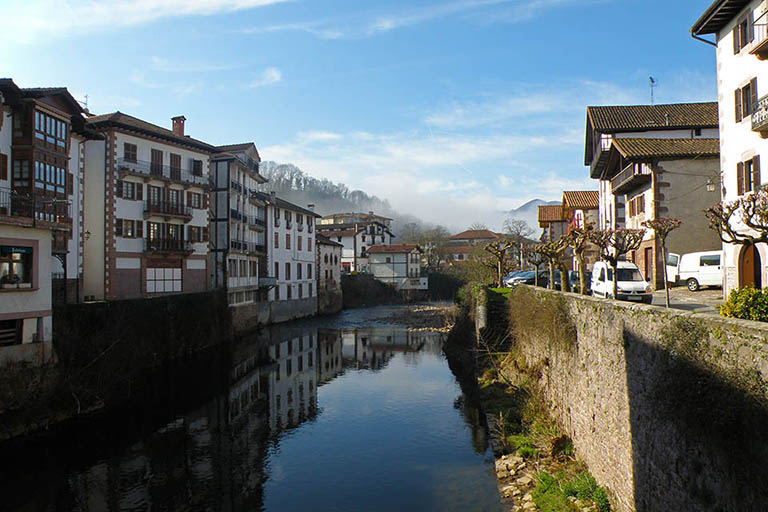 Distance/elevation: 29,6 km / (+1.260 m), (-1.140 m)
Time 7h55min (walking time without stops).
Difficulty: A long stage with a lot of elevation gain and loss. The route is waymarked perfectly.
Water: One kilometre from Bera. On the way to Usateguieta you cross over a small river. The Inn at Lizarrieta.
Route/Itinerary:

(0h0min; 0kms) Bera/Vera de Bidasoa (35m). Once you have reached the road that crosses Bera and joins Pamplona with Irún (NA-8304), you need to take the turning with road NA-1310, signposted as (Francia-Ibardín) and (Francia-Lizuniaga). After about 500m you will come to a small roundabout next to a car park, where there are some GR11 panels, and turn right. Next to the Ikastola Labeaga school building, a tarmac track heads uphill in a southerly direction, among farmhouses (Suspel ttiki neighbourhood). About one kilometre later you come to a drinking fountain. Follow a track on the right as far as another concrete track – by the farmhouses at the top – which leads you up the hill (S). Further on there is a fork (left) and soon afterwards it turns into a very steep grassy path to the top of...

(0h55min; 2.9kms) Santa Barbara (396m). There is a bunker at the summit and a monument in memory of three mountaineers who perished on the north face of the Taillon. Continue along the ridge (E) until you reach a path, which you follow for 250m as far as Meaka col (335m), where you take another one – straight ahead – climbing up among pine trees to Sorokogaña (360m). The path downhill through fields and past Larratenea farmhouse leads you to Idoia col (270m), which is crossed by a track at the very point where it splits. Keep walking (E) along the track (60m), and then to the left – uphill – for another 300m, to a junction where you take another path to the right. After another 250m, turn left along a path that leads you back to the track after about 200m. Keep walking for about 400m, leaving a water deposit on the right, until you turn right at a junction. From now on, you will follow the main path (Usateguieta way) to...

(1h40min; 8.2kms) Liarrieta/Lizaieta pass (440m). Crisscrossed by the road that joins Etxalar and Sara, you come to a bar-Inn (selling basic produce) and what would have been the border post.

Thanks to its location and geographical aspect, Lizarrieta pass is a strategic point for the passing of migratory birds between Europe and Africa (the Atlantic route) and boasts one of the largest populations of birds of prey and other gliding birds. Because of its ideal position for observation and study – along with the more easterly locations of Lindus and Organbideska- Proyecto Lindus came about.

But if this spot is known for anything, it is for the hunting of wood pigeons using nets, a tradition that goes back hundreds of years that bears no relation with the shooting platforms dotted along the border, for which large amounts of money are paid.

Cross the road and follow the track as far as Xorilepo col (472m) where you will come to the variant GR11.3 which comes from Lesaka. Leave the track and take a path (SE) down to "Palomeras Usotegui", a restaurant that is currently closed. Follow the path (E), passing a few farm buildings, and Lakain col (429m) and keep on skirting the hill until you reach a wide path (1km after Lakain col) below Navarlatsa col (boundary stone 50), where in 2014 a number of markings had disappeared due to tree felling. Follow the wide path downhill, taking care to follow a path that veers to the right, after about 100m. Cross over Argarate stream and you will reach Maritonea farmstead (a cluster of farmhouses with a large shed for livestock), where you will find a couple of drinking fountains from which to fill up with water. Carry on along the track, taking a right-hand fork after 600m, and after another 150m leave the track (left) in Orainbetasora (drinking fountain and picnic area). The GR11 rises up (S) through comfortable terrain as far as Elordi col (560m) – where it coincides with a couple of archeological paths that visit the Maiko and Zentiñela megaliths – and drops down to the left (E) to reach Iraza col (535m), where it joins a track leading to...

(4h20min; 16.2kms) Ursumiats/Urtsumiatza col (538m), crisscrossed by an old road that comes from Etxalar. The information panels indicate the archeological route you saw previously. The GR11 climbs along a track (S) that forks (left) just before reaching Gaineko Saroia col (607m). You then drop down to Also col (543m) where several paths converge, cross the col and follow the track downhill (E) for about 250m, where you turn right.

(5h05min; 19,3 kms) Esquisaroi col (525m). From now on the going gets tougher. Cross the road and walk up the "camino de Eskisaroi", turn right after 1.6kms skirting around Atxuela hill along the west face until, some 800m later, you join another path that skirts around Arburu (827m). All along this section of the walk from Esquisaroi col you can make out several bunkers that were erected following the Second World War.

(5h50min; 22,3 kms) Atxuela col (785m). A number of paths reach this point. Take the main one (S) as far as Iñaberri col (795m), between Larrondo (852m) and Urruspil (819m), 25 minutes from Atxuela col. From this point onwards the path descends and at the Maistruzarra farmhouse you will find a drinking fountain.

(7h00min; 25,9 kms) Bagordi (585m). This is a large open space with picnic tables and a drinking fountain. There is a road up to this point coming from Elbete. The GR11 heads downhill, crossing the road a couple of times.

In Elizondo there is a choice of accommodation. (See options) .

In Elizondo, the Albergue Kortarixar (//) has a bar and restaurant which serves baguette sandwiches and mixed platters as well as a succulent ciderhouse menu. Situated very close to the centre, on the main road (Calle de Santiago, 43), Eguzkialde Ostatua (//) prepares home-made food, a daily menu, baguette sandwiches, and individual dishes among other things, all for a reasonable price.

In Bera and Elizondo you will find all kinds of amenities such as supermarkets, sports shops, etc.

To get to Bera/Vera de Bidasoa (connections with Pamplona, Irún and San Sebastian by bus), La Baztanesa (/) and La Burundesa (/) bus companies.

To get to Elizondo use La Baztanesa (/) bus company. 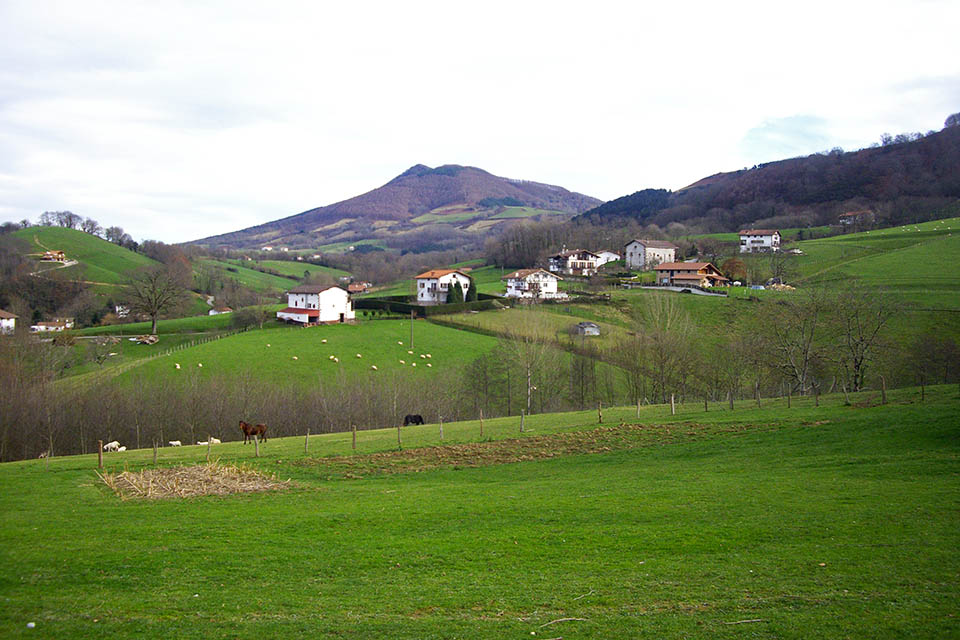 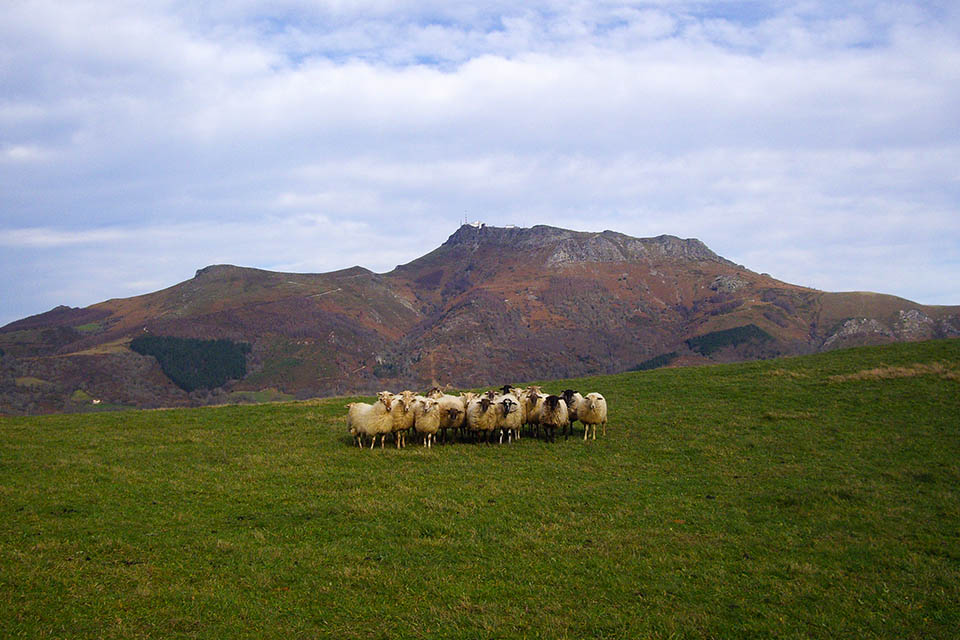 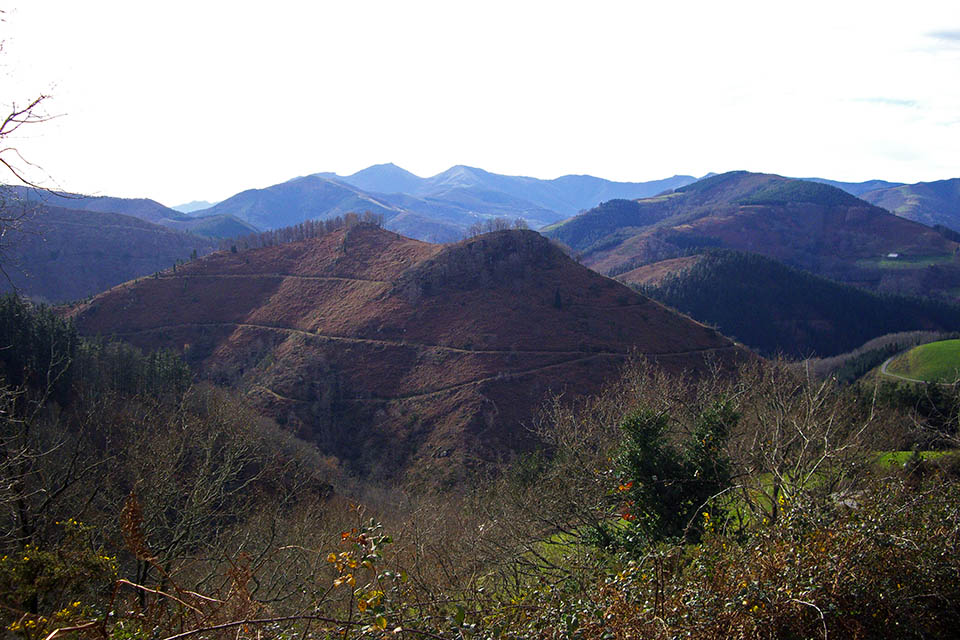 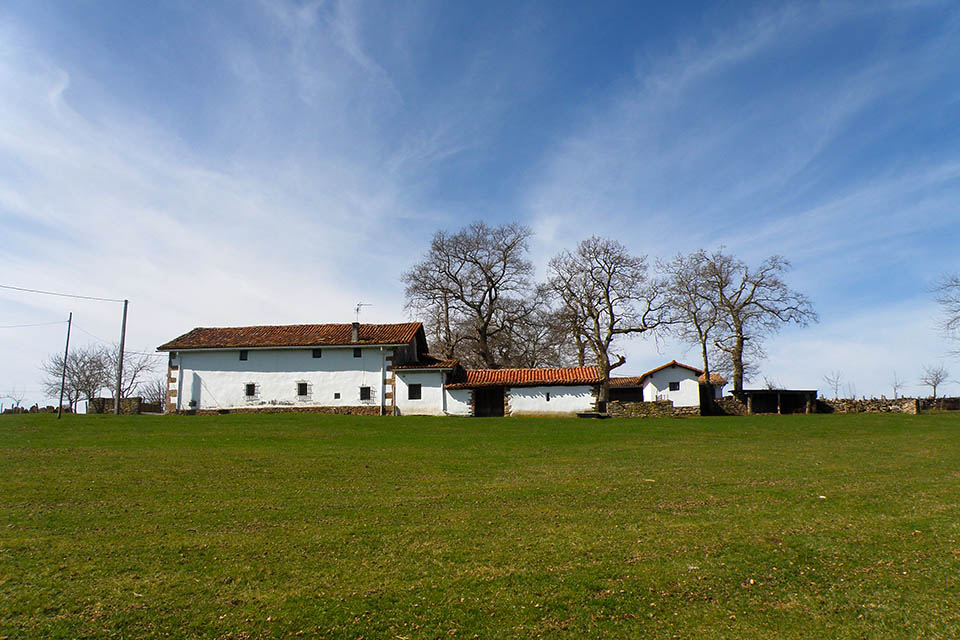 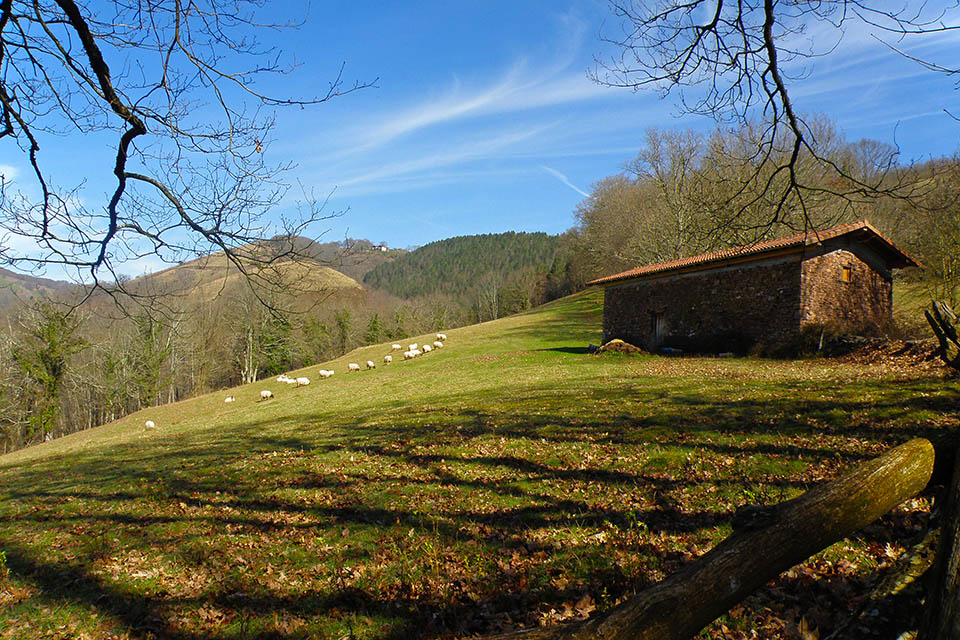 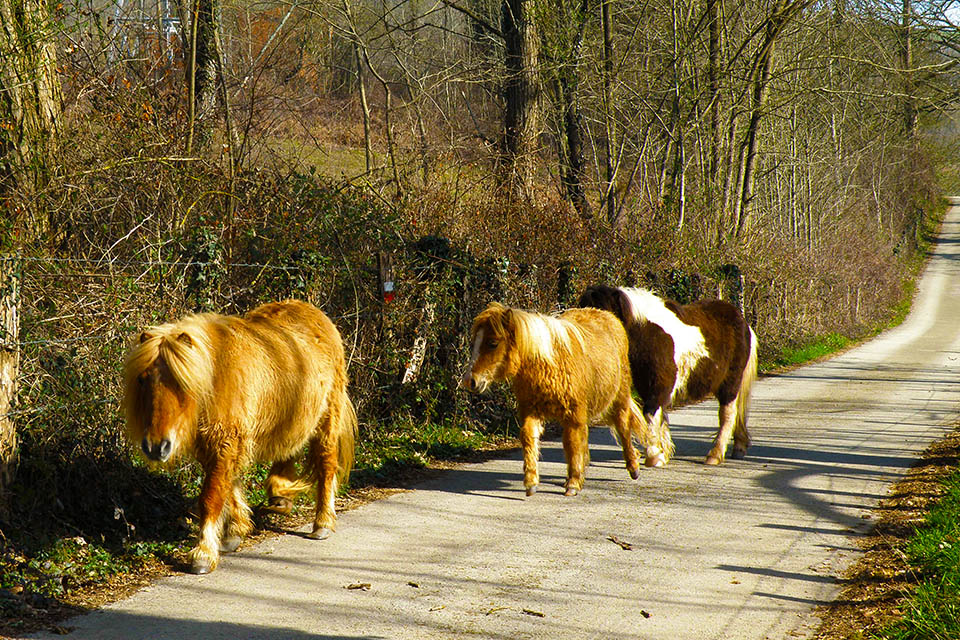 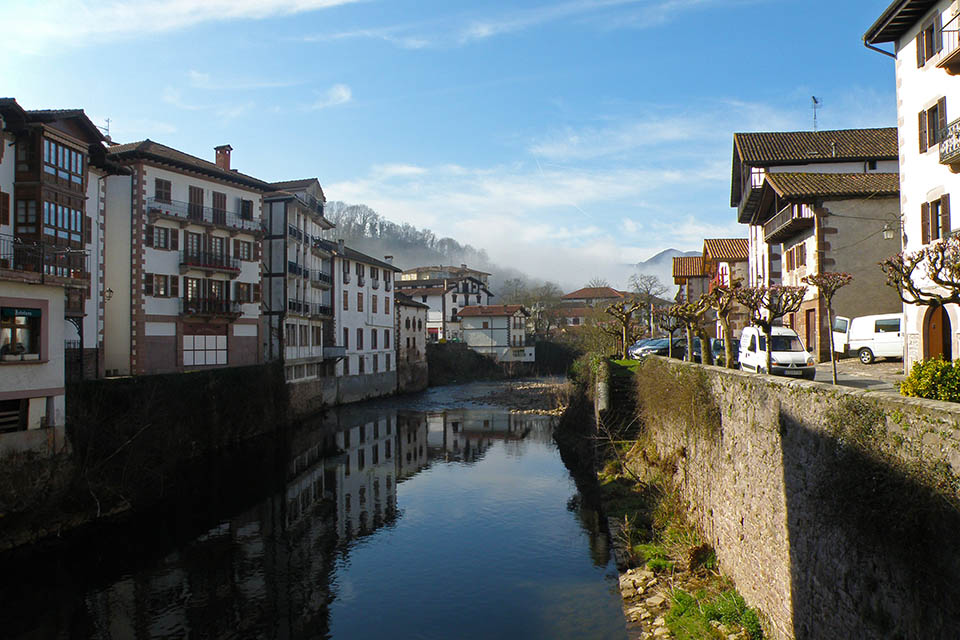 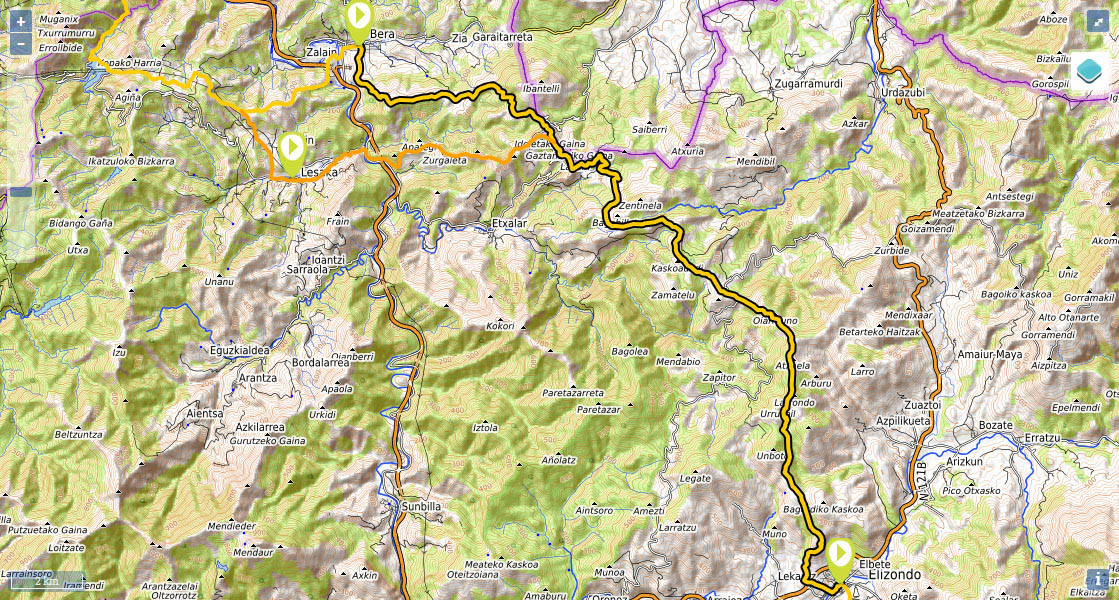 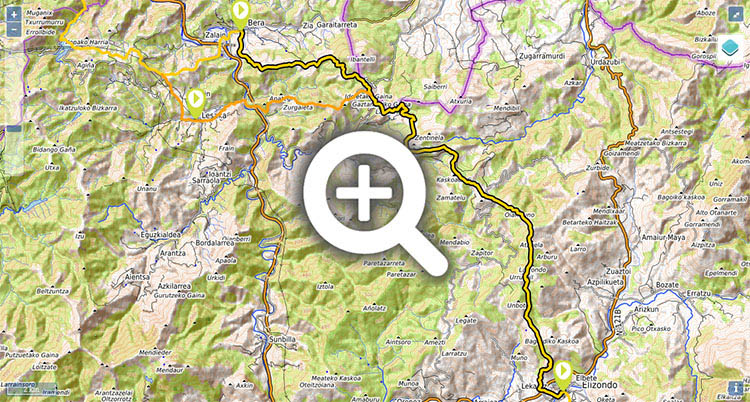