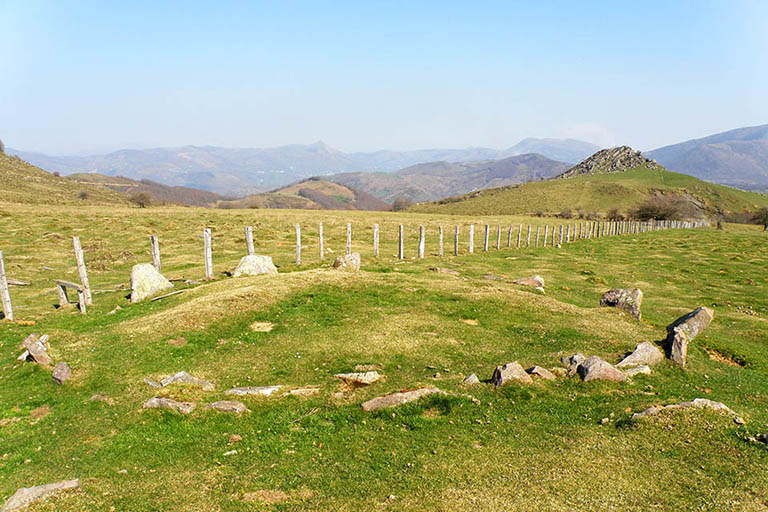 
Difficulty: medium. The distance of the stage is not excessive and the uphill climb is very gradual. Waymarking is good, although in foggy conditions you may have difficulty finding your way at the highest point of the stage, in the grazing pastures. The stage doesn’t end in a locality, so a solution to this will have to be worked out in advance.

Suggestions: During the stage you will have the chance to reach the summit of Peña de Alba, via a shortcut in exchange for a steeper climb, where the views are well worth the effort. You could make the stage longer by walking as far as the Sorogain auberge (7kms; 2 hours) and taking a shorter following stage to Orbara.

The route leaves the more Atlantic aspect of the Pyrenees behind, and heads into the Quinto Real mountains where the beech forest reigns supreme.

(0h0min; 0 kms) Elizondo (190m). Standing by the road that crosses Elizondo, next to Santiago church, you will see the red and white markings of the GR 11. Take the tarmac track and soon afterwards, next to an information panel about the GR 11, turn down the path on your right. This isn’t the last time you will see the track, as you will soon come across it again by the Zaldarriaga,farm building in a flat area. Shortly afterwards the markings lead you along a path on the right, avoiding the tarmac.

(0h50min; 2,6 kms) Jaimesaltsu farm (360m). Next to Jaimesaltsu farm building you come across the track again. Ignoring it, you stay right along a path, you cross the track and soon afterwards you come to a drinking fountain with a trough. Further on another fountain appears, and you pass an area that is often muddy, before facing a steep rise, then a sharp bend where you see the track once again. Cross it and stay on the path (modified section – it used to follow the track), and a few metres later you should see a drinking fountain on your left (Tranpako Iturria). Keep walking through the beech forest in search of the...

(2h20min; 7,4 kms) Urbillo col (890m). There is a hunters’ refuge (closed), a drinking fountain, tables and a stove. You have two options here: stay on the GR 11, or climb to the top of Peña de Alba (unmarked) and rejoin the main route just after the boundary stone 128, close to the Argibel stone circle (shorter, but steeper). If you go for the second option, shortly after the col you should follow the uphill paths in search of the best way across. On the way down, follow the ridge that breaks away to the SE, walking along the highest point and enjoying the spectacular landscape. If you follow the GR 11, leave the track at Urbillo col, then stay on the path below the north face of Pico de Alba. You soon come to an area of clearings, crisscrossed by a few streams. You have arrived at Argibel col, where a fence marks the frontier. Follow it in a southerly direction, and look out for the Argibel stone circle. Keep walking alongside the fence, passing a succession of pigeon-shooting platforms, and an area of beech woodland, until you reach a col, where you will see a track coming from the Baztán villages. At this point there is a large pond, a stream and a cabin.

(3h35min; 11,6 kms) Kinto cottage (960m). This is a hunters’ cottage (closed). It has a drinking fountain and a table. The path continues uphill, through beech forest, and you come to a clearing, which may lead to confusion on foggy days. Cross over the barbed-wire fence at the first col and skirt round Iparraldeko Kaskoa, passing a number of shooting platforms, until you reach the...

(4h40min; 15,6 kms) Zagua col (1164m). Be careful at this point. While the GR 12 follows the ridge, you need to take a sharp turn left (N) and start the descent towards Urkiaga Pass. Before you enter the beech forest you will pass a cottage, and when you are close to reaching Urkiaga Pass, you will rejoin the GR 12.

In Elizondo there is a choice of accommodation. (See options).

At the end of the stage, no accommodation is available at the Urkiaga Pass. The best options for sleeping under a roof is Hostal Arrobi Borda (Tel: +34 948 304 709 / +34 686 564 717 (attends whatsapp); info@arrobiborda.com). The Arrobi-borda is located 7kms from Urkiaga Pass, on the way to Eugui, on the crossroads with the road that goes to Irurita. It stands in natural surroundings, within the Quinto Real forest, is a traditional farmhouse and also boasts a restaurant.

In Elizondo, situated very close to the centre, on the main road (Calle de Santiago, 43), Eguzkialde Ostatua (//) prepares home-made food, a daily menu, baguette sandwiches, and individual dishes among other things, all for a reasonable price. The Albergue Kortarixar (//) has a bar and restaurant which serves baguette sandwiches and mixed platters as well as a succulent ciderhouse menu.

At the end of the stage Hostal Arrobi Borda (//) (7kms from Urkiaga on the way to Eugui), have a restaurant.

In Elizondo you will find all kinds of amenities such as supermarkets, sports shops, etc. At Urkiaga pass no services are available. Only in case of emergency, but this is not really an option, consider the use of a bunker to spend the night.

Transport: In Elizondo, La Baztanesa (/) bus company runs buses daily to San Sebastian, Irún and Pamplona. Arrivals and departures take place on calle Santiago, next to Bar Mendi. Buses do not run to Urkiaga Pass. The best way is to take the bus to Eugui, and from there to take a taxi. Some hostels in Eugui co-ordinate transport for walkers from the Pass (see accommodation).  The connection Eugui-Pamplona is operated by the company Autocares Artieda (/) 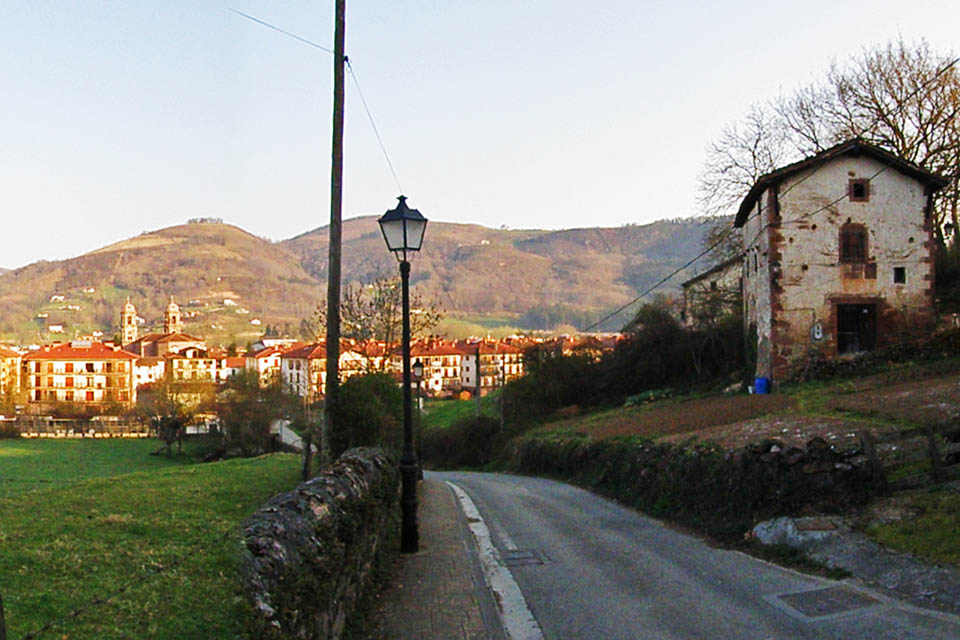 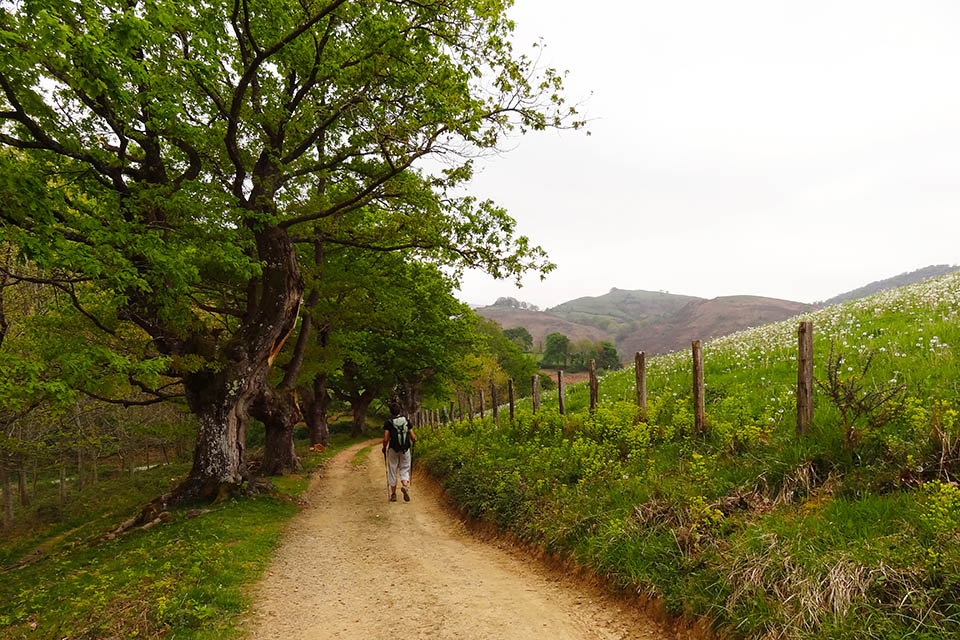 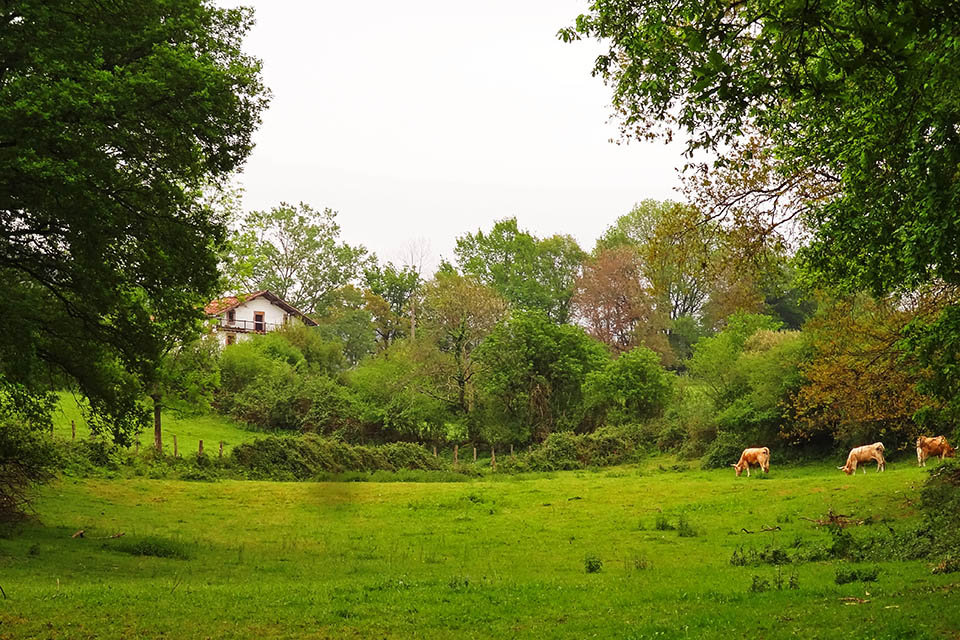 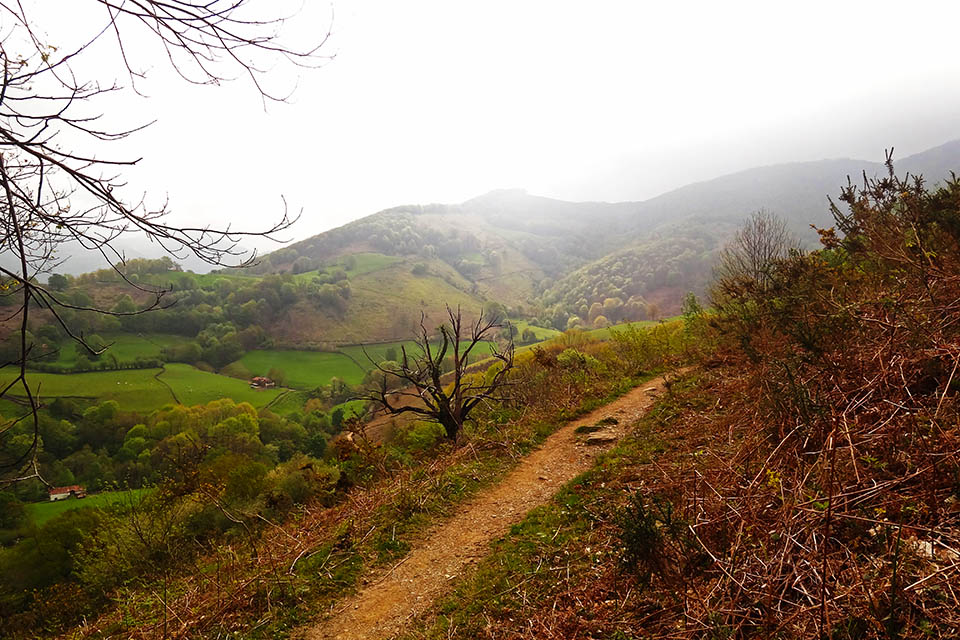 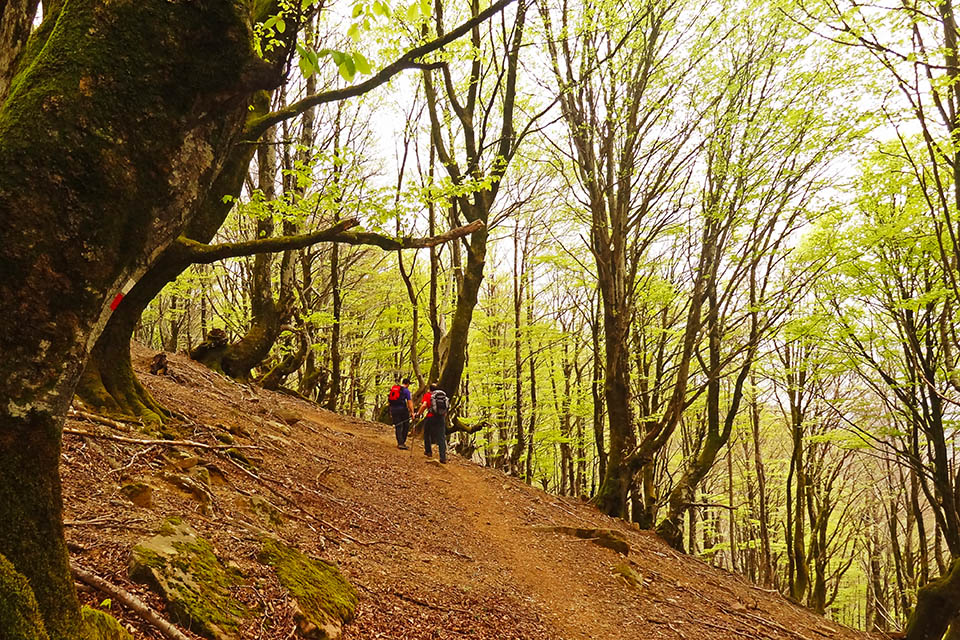 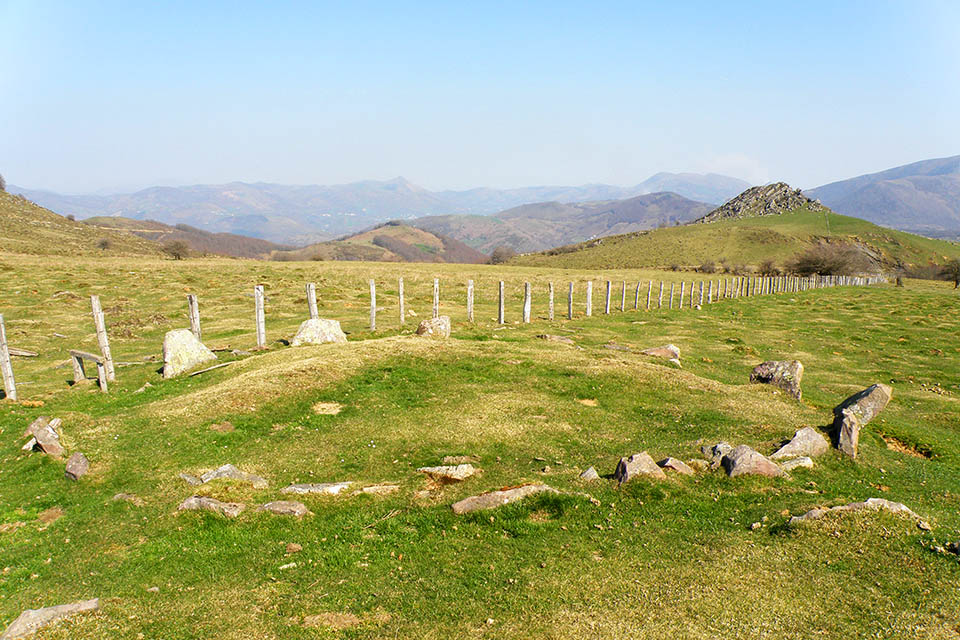 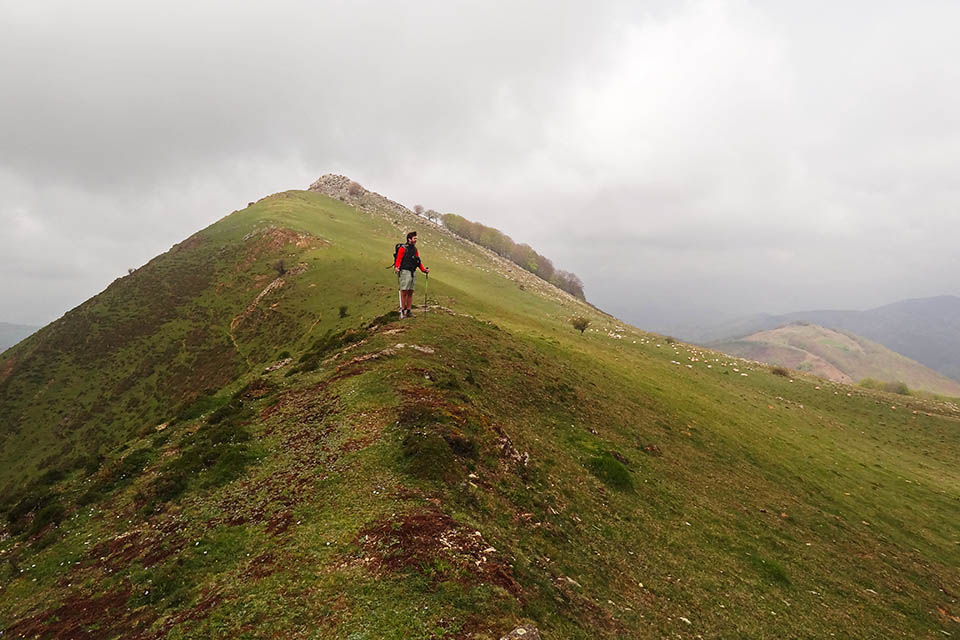 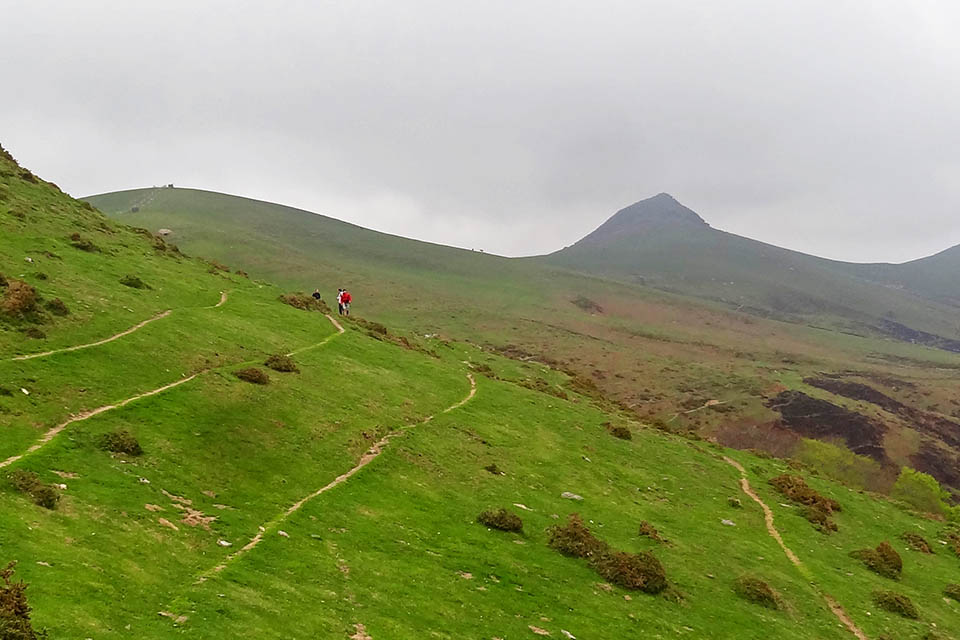 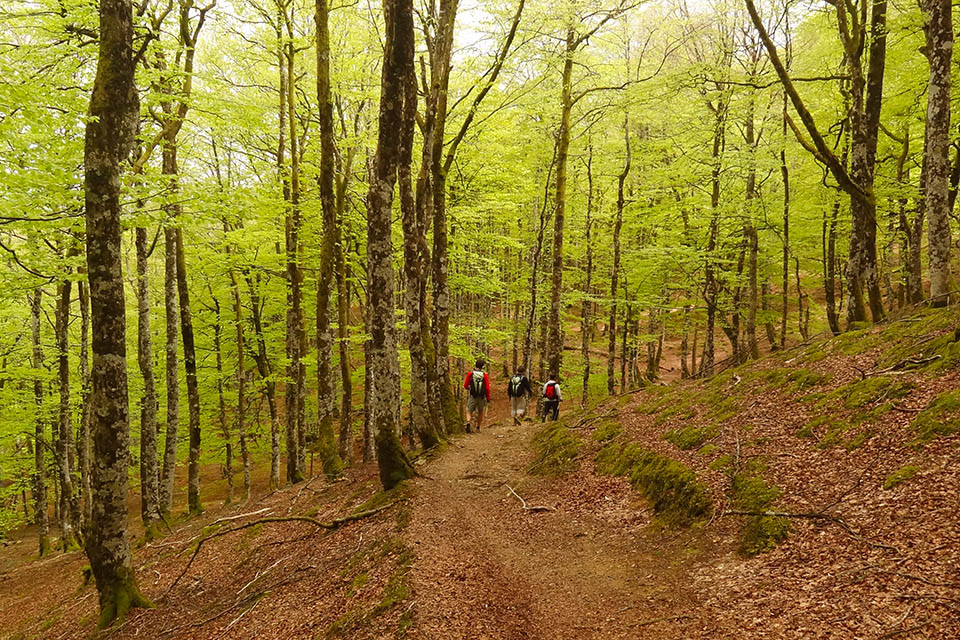 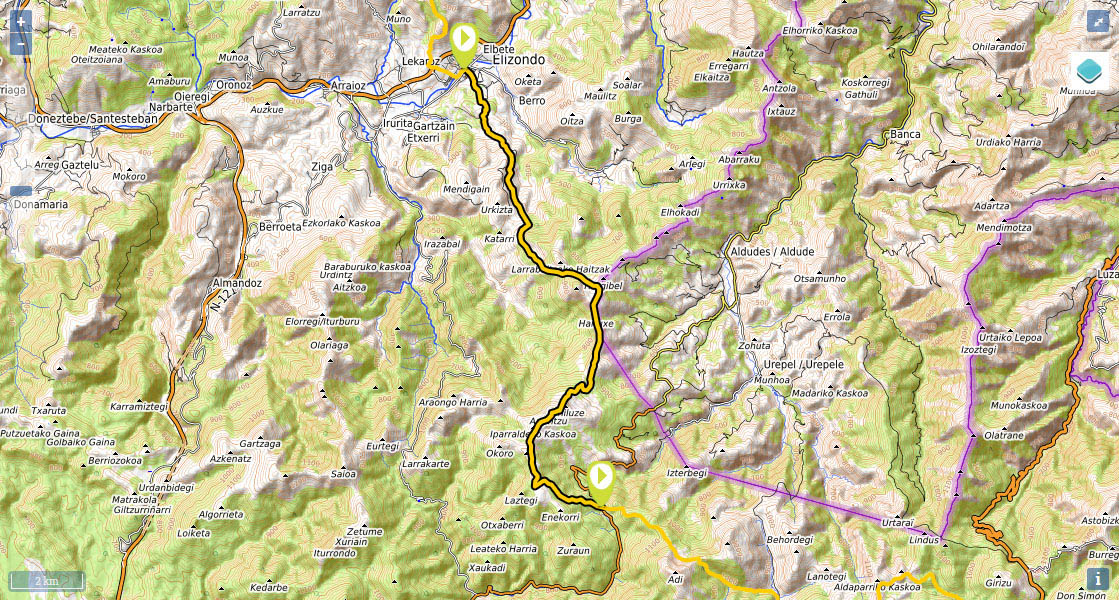 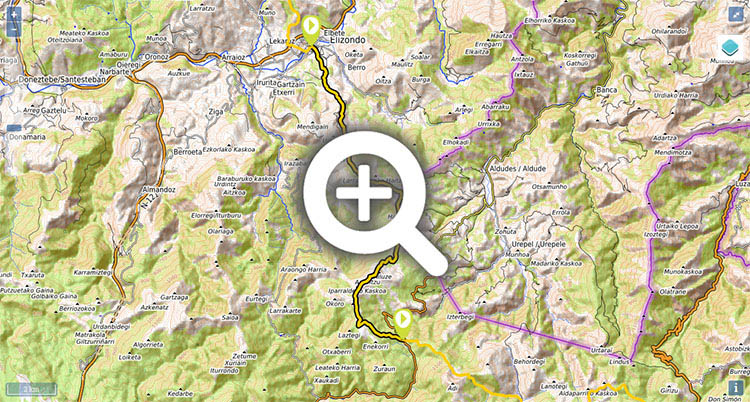