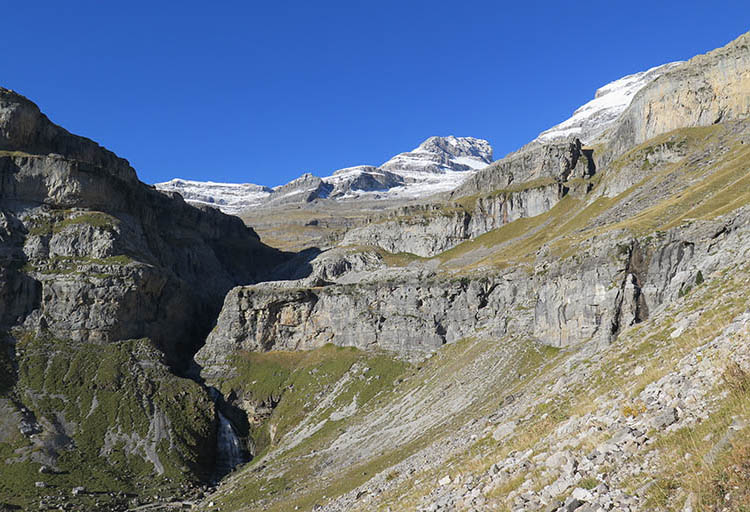 Distance/elevation: 24.6 kms / (+1,238),(-381)
Time: 8h30min (walking time without stops).
Difficulty: The distance.
Water: Along the descent from Bujaruelo to Puente de los Navarros you will come across a number of streams to get water from. There are several drinking outlets in the Pradera de Ordesa. Half-way along Ordesa valley there are a couple of drinking fountains as well as the odd stream on the way to the Circo de Soaso.
Suggestions: By making use of the stakes above the Cola de Caballo waterfall, you can shorten the climb up to Góriz auberge by around 10 minutes. This is only to be recommended in dry conditions and used by mountaineers who do not suffer too easily from a fear of heights.
Notes: You do not pass any villages until Parzán. In case of necessity, you can take a detour to Torla (3kms by road) when you reach Puente de los Navarros.
Route/Itinerary:

The Pyrenees Trail heads down Bujaruelo valley via the narrow Garganta de los Navarros gorge and enters the Ordesa y Monte Perdido National Park and climbs the Ordesa valley until it comes to Góriz mountain refuge.

(0h00min; 0.0kms) Refugio de Bujaruelo (1,338m). The GR11 crosses over San Nicolas medieval bridge, then heads down the left-hand side of the valley, following the Senda de los Abetos trail. After about 3kms you reach Los Abetos bridge just opposite the Valle de Bujaruelo campsite. Do not cross the bridge and continue along the left bank as far as the

(1h25min; 4.1kms) Puente Nuevo or Santa Elena Bridge (1,208m), where you will once again come to the vehicle-friendly track that goes up to the auberge. You cross the bridge, and follow the path that now heads along the right-hand side of the narrow Garganta de los Navarros gorge. After 3 or 4 minutes you cross a stream coming from a waterfall known as the “Salto del Carpín” and 10 minutes later, half-way up a short uphill climb, you reach the Paso de la Escala: a straightforward traverse equipped with a lifeline. On the descent, which starts out with magnificent views over Ordesa valley, you should ignore two right-hand turns that lead to Cebollar pass and Torla. The GR11 comes out into the access road to the Pradera de Ordesa. Follow it to the left for 300 metres as far as the...

(2h30min; 7.3kms) Puente de los Navarros (1,075m), the western edge of the National Park. The GR11 leaves the road, and on the right, drops down to cross the River Arazas via the Puente de la Canaleta bridge. Shortly afterwards you take a path that heads up to the left - to the right one of the Camino de Santiago routes leads down to Torla – and which some 10 minutes later comes out into a wider path. On the right you go to Torla via the GR15.2, and to the left you follow a path up to Bajo. The path enters the Ordesa valley. Gigantic mountain walls open out on both sides: to the left, the Mondarruego or the renowned Tozal de Mallo, and to the right, the Sierra de las Cutas. The walk is made even more pleasant by the presence of three waterfalls: Molinieto, Tamborrotera and los Abetos. The GR11 retreats to Pradera de Ordesa, as you reach a path that is wheelchair-friendly.

(4h20min; 12.6kms) Pradera de Ordesa (1,300m). In summer, this overcrowded spot is the customary starting point for the vast majority of excursions. There are frequent bus services to the car park, which is closed in summer to private vehicles. Around this area you will find several drinking fountains, public toilets, a bar and souvenir shop. The path rises all the way up Ordesa valley. After about 45 minutes you reach a panoramic viewpoint over Arripas waterfall, and a drinking fountain. Shortly afterwards appears the diversion to the Cueva and Estrecho waterfalls, the latter requiring one more diversion further up. You pass a shelter (1h20min from the Pradera), then a drinking fountain and finally you reach the Gradas de Soaso (2h from the Pradera);a succession of mini waterfalls. After a series of twists and turns you leave the woodland behind and come out into a huge plain which is enclosed at the far end by the walls of the Circo de Soaso. Close to the path there is a small free shelter.

(7h00min; 21.4kms) Cola de Caballo (1,750m). Hidden to the left of the cirque lies the best-known of all the waterfalls in Ordesa and indeed the Pyrenees. At this point you have two choices: either to climb up ahead via the Soaso stakes, or to follow the GR11 path to the right. Making use of the stakes means a saving of 10 minutes, and is only to be recommended in dry conditions and used by mountaineers who do not suffer too easily from a fear of heights.

At the beginning of the stage, the Refugio de Bujaruelo (//) , (64 beds in rooms for 2, 4 or 8) has a restaurant, a café, camping facilities and food all day long. Three kilometres down the road, following the track coming from Puente de los Navarros you will find the Camping Valle de Bujaruelo (//) . As well as an area for camping, it has chalets, a shelter, a bar-restaurant plus a small supermarket.

During the stage you will come across a shelter on the way up to Pradera de Ordesa, and another one soon after the panoramic viewpoint at Arripas waterfall. In Soaso cirque you have Soaso free refuge (small, in good condition).

At the end of the stage you have the Refugio de Góriz () . In high season and most weekends of the year it tends to be fully booked, so be sure to book in advance, which is done exclusively online. Only late bookings can be made by telephone. The other option is to camp outside the refuge, between dusk and dawn (following park regulations).

The Valle de Bujaruelo campsite has its own supermarket (3km from San Nicolas de Bujaruelo following the track). In Torla, after a 3km detour from the route, you can find practically anything. At the Pradera de Ordesa you can eat for a reasonable price, or get takeaway sandwiches. The souvenir shop sells walking sticks, maps, lighters, t-shirts, etc.

Bujaruelo is accessible by car via a track (6km from Puente de los Navarros). Another option is to hitch a ride with one of the cars heading to the auberge or the campsite.

Góriz mountain refuge is only accessible on foot, the most common route being the GR11 coming from Pradera de Ordesa. A tourist bus takes you from Nerín up to Sierra de las Cutas, which shortens your approach journey considerably.

During the summer months and over Easter, the Park public transport bus service takes you from Torla to Puente de los Navarros and on up to Pradera de Ordesa (regular times there and back throughout the day). During these periods private vehicles are not allowed access to Ordesa valley (Pradera). There is a car park for private vehicles and buses in Torla. Another way to reach Puente de los Navarros from Torla is by walking the GR 15.2 route.

To get to Torla, there are buses with connections from Sabiñanigo-Jaca, operated by the company Alosa. 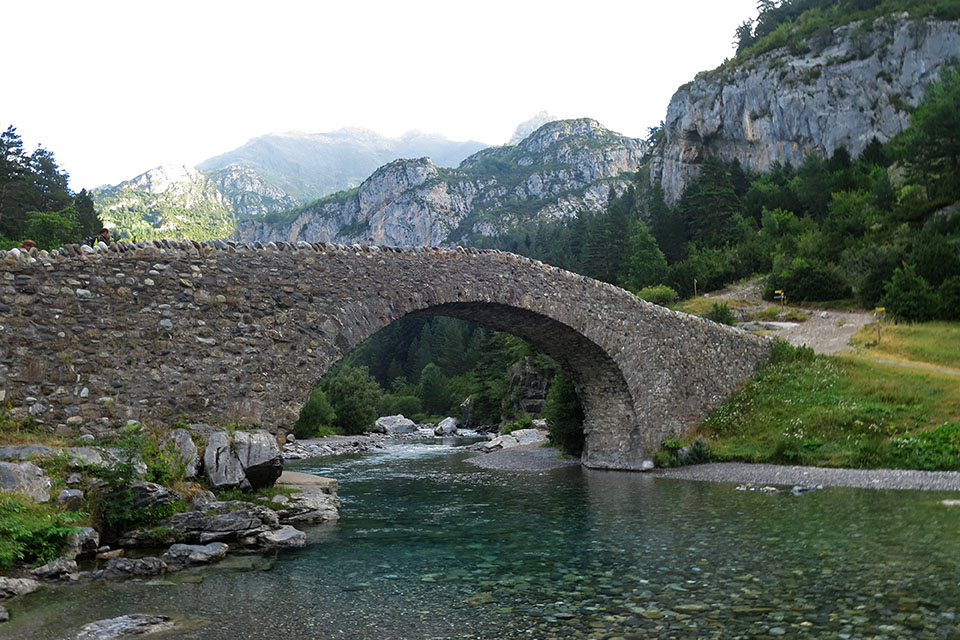 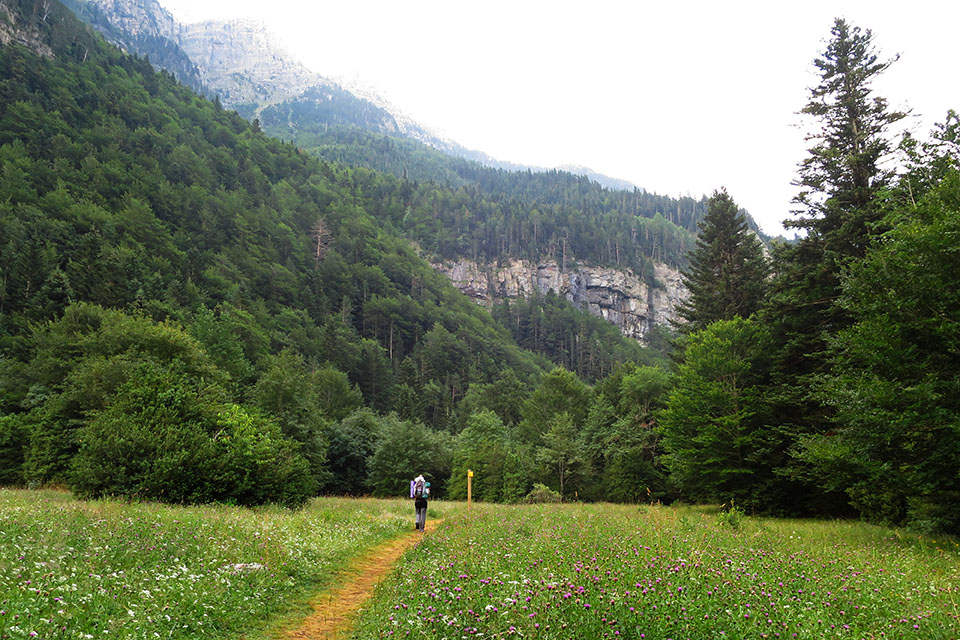 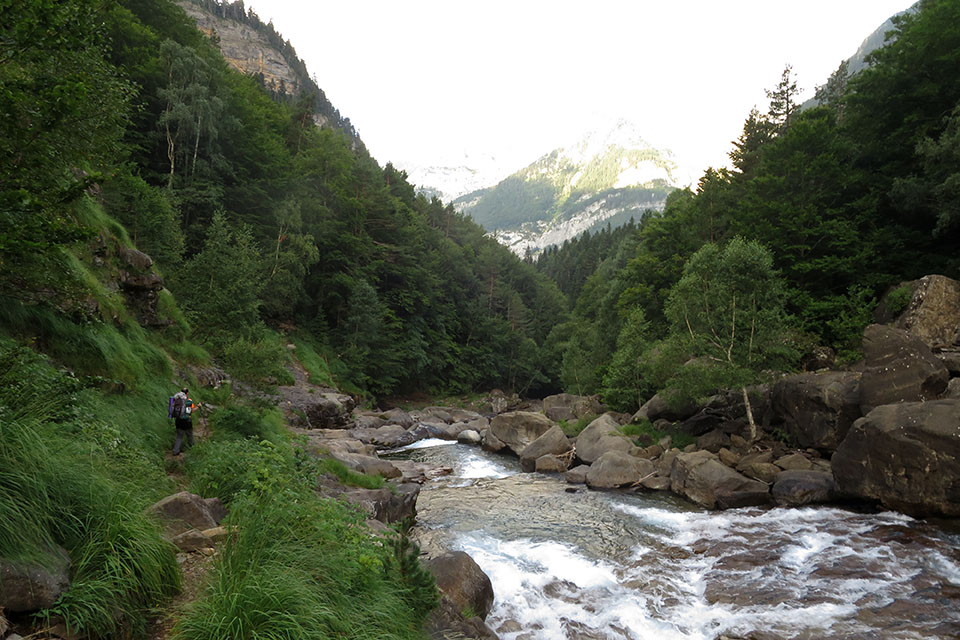 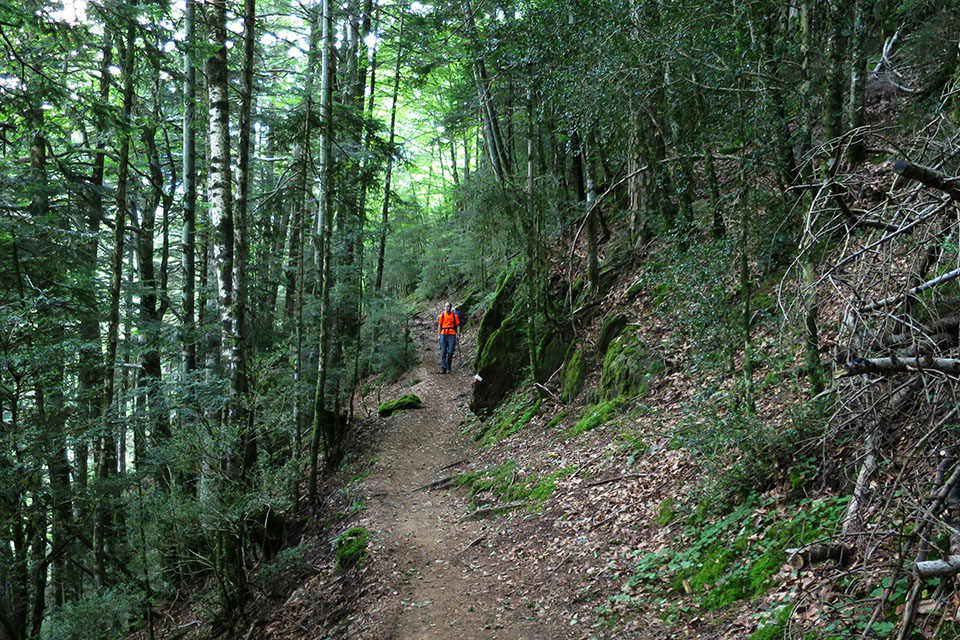 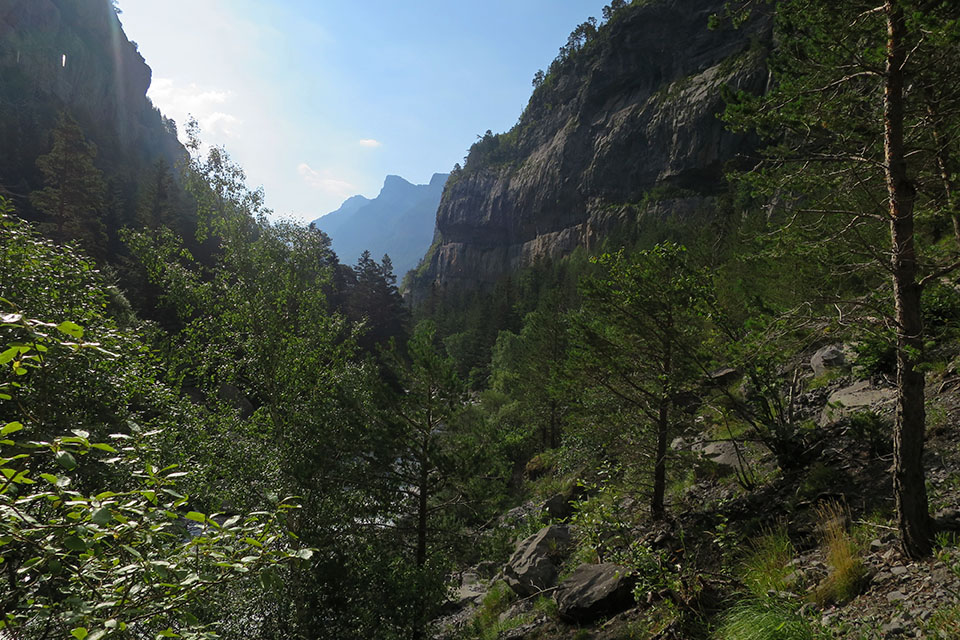 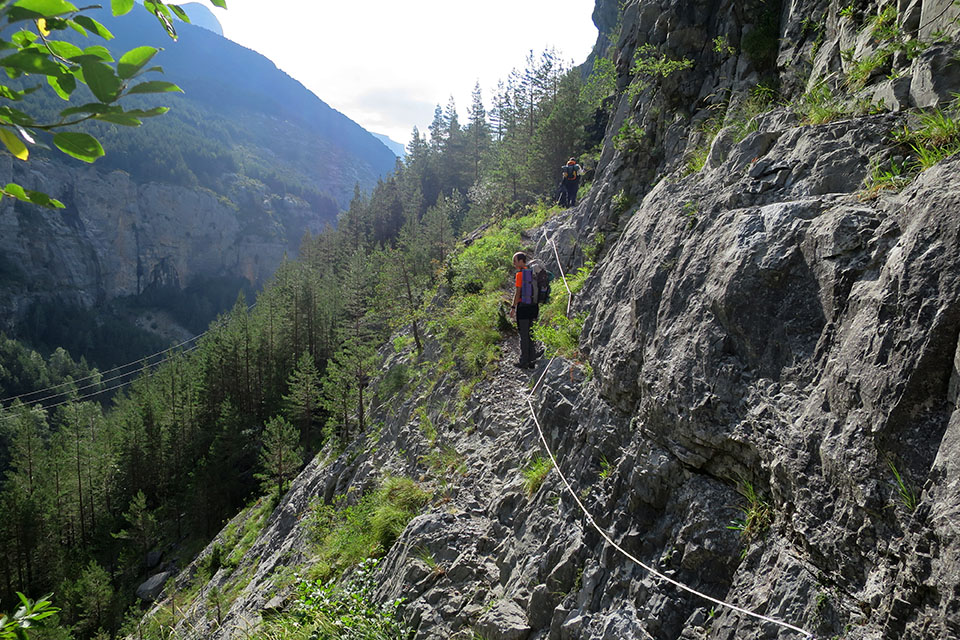 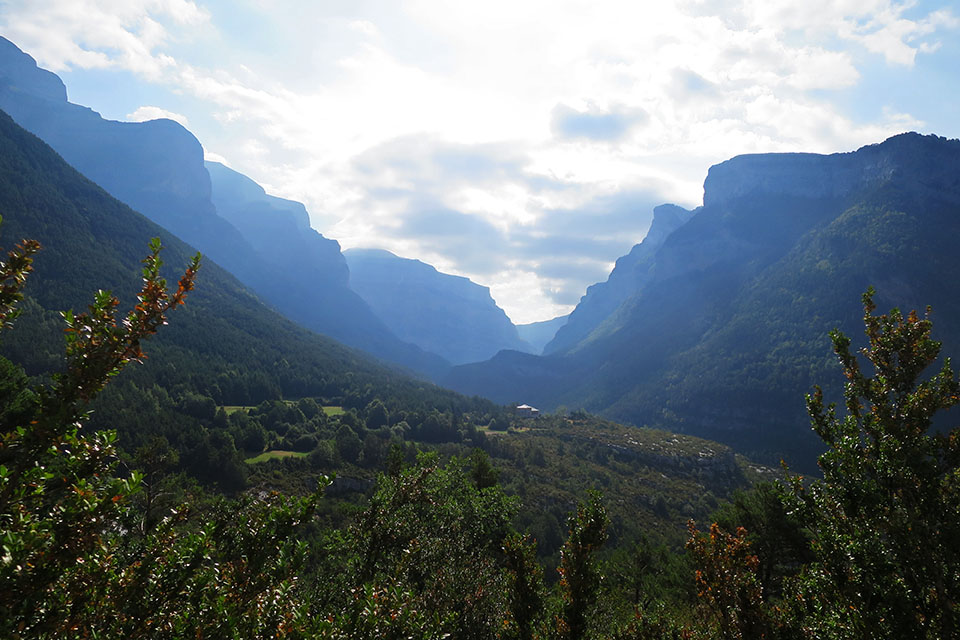 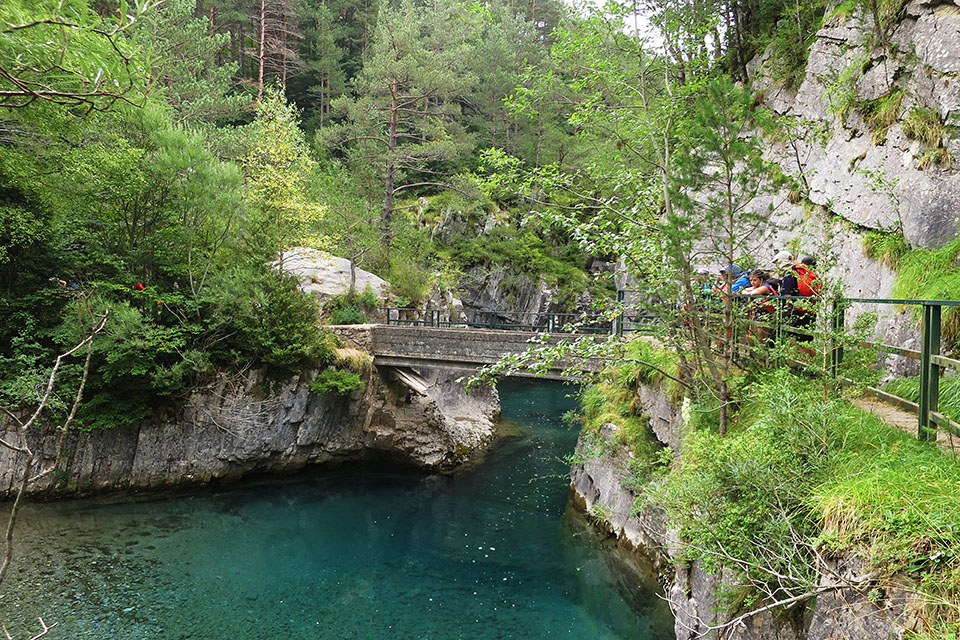 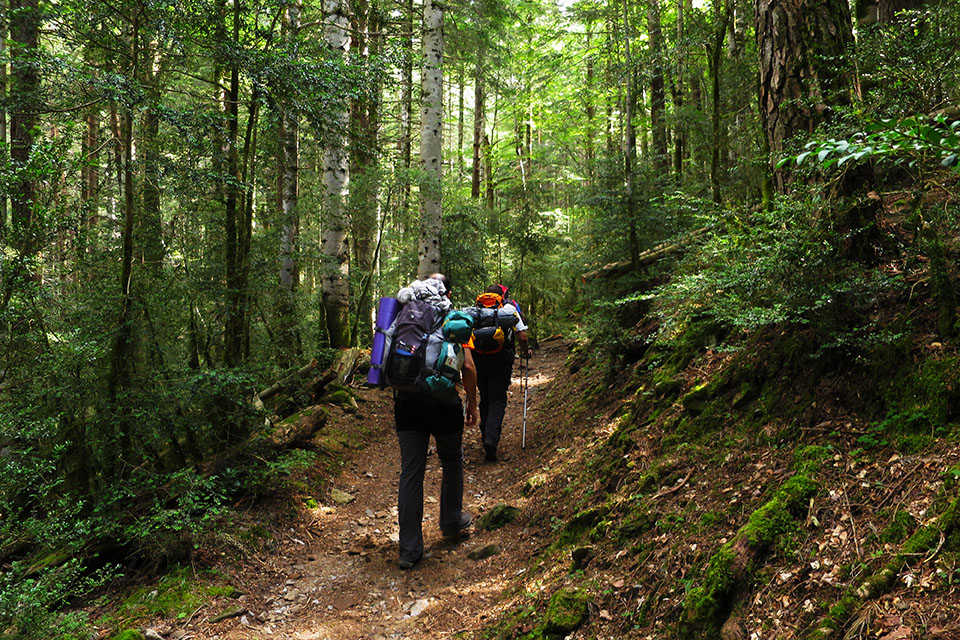 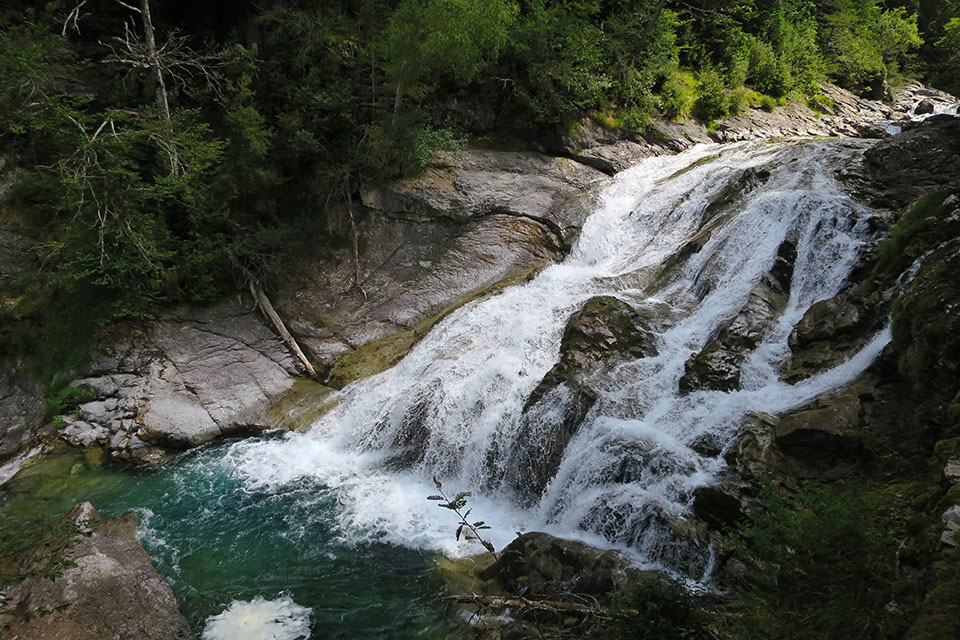 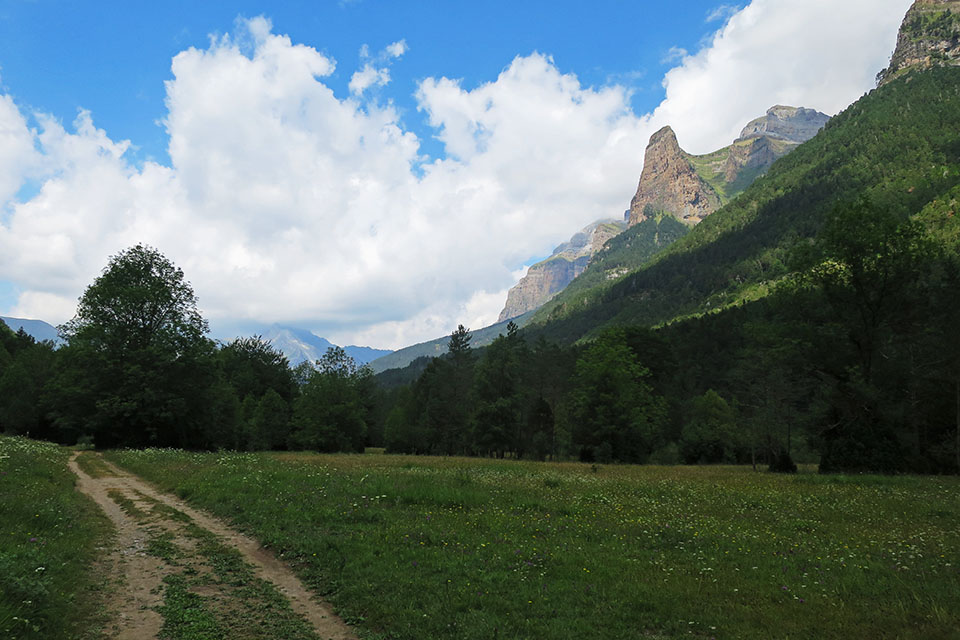 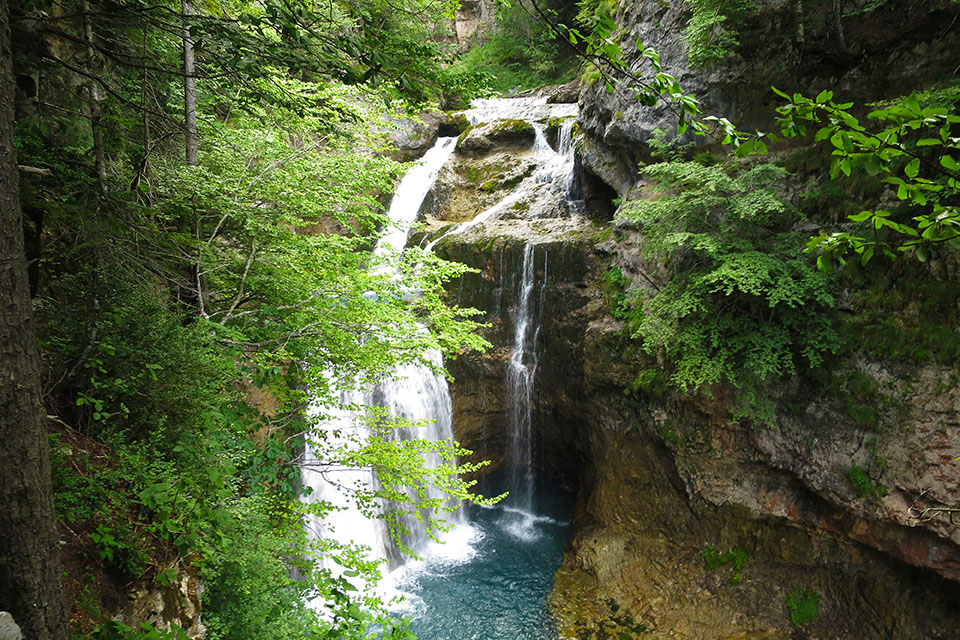 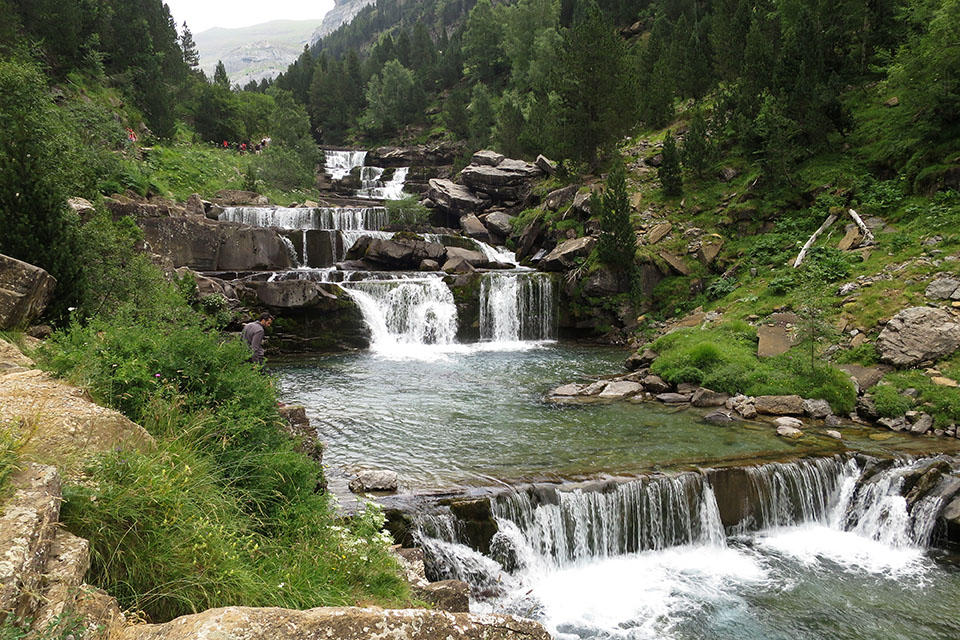 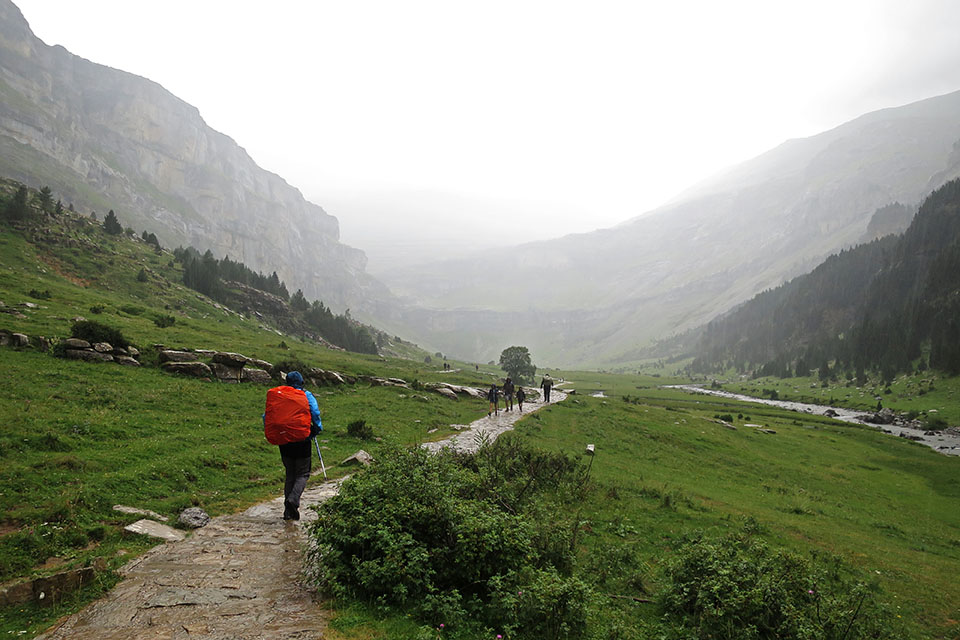 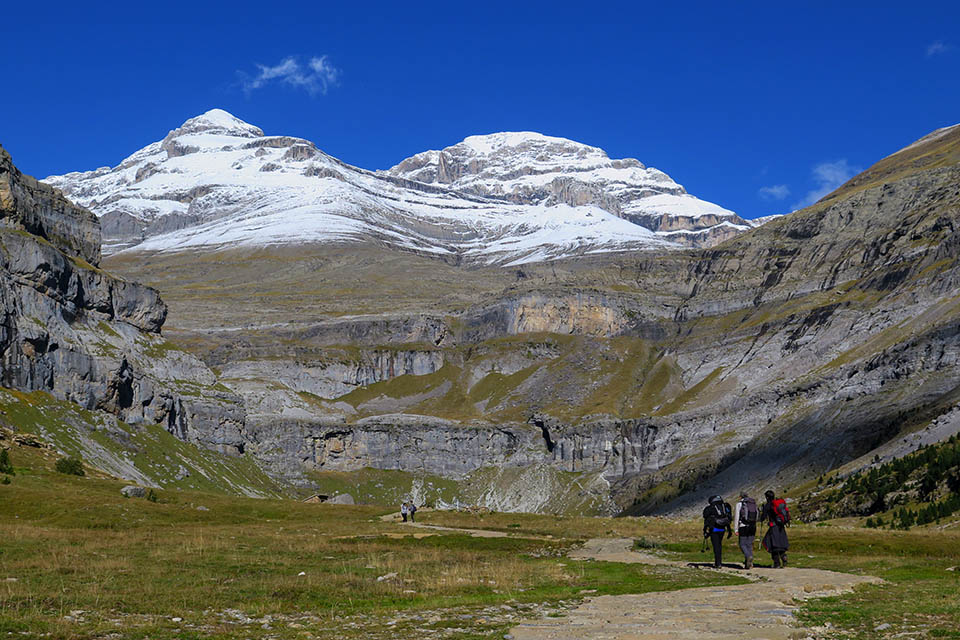 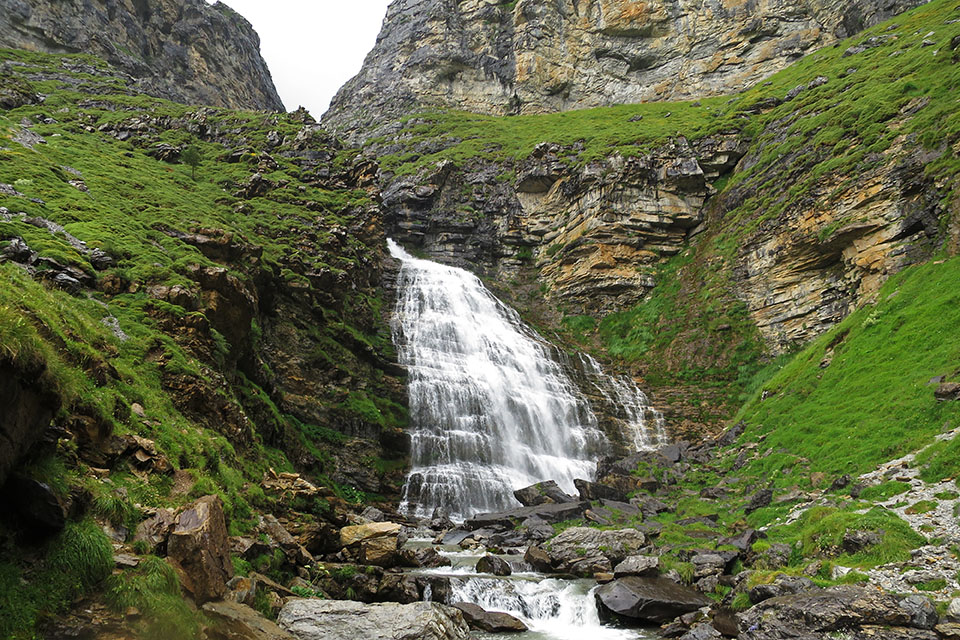 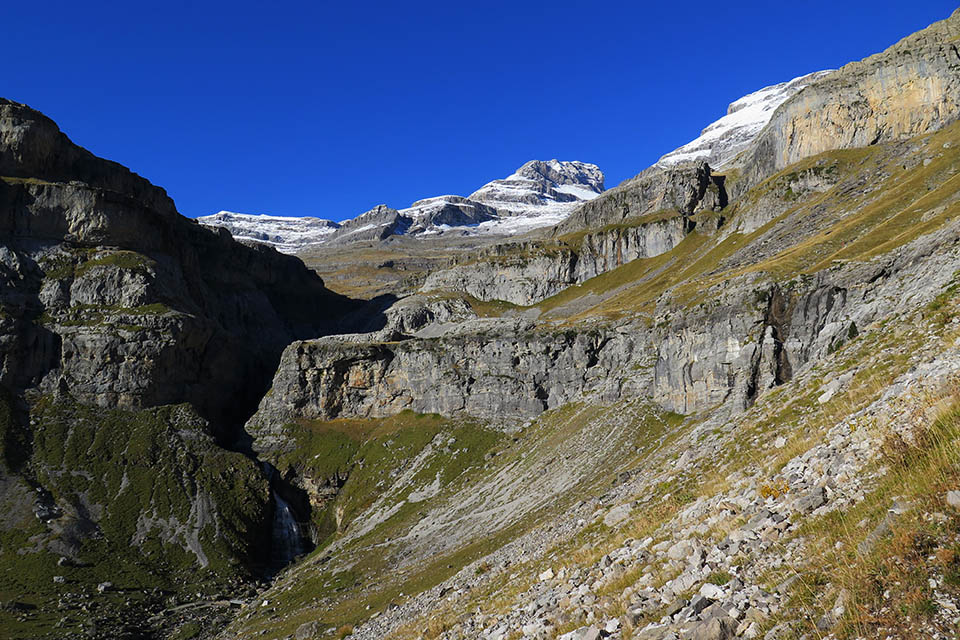 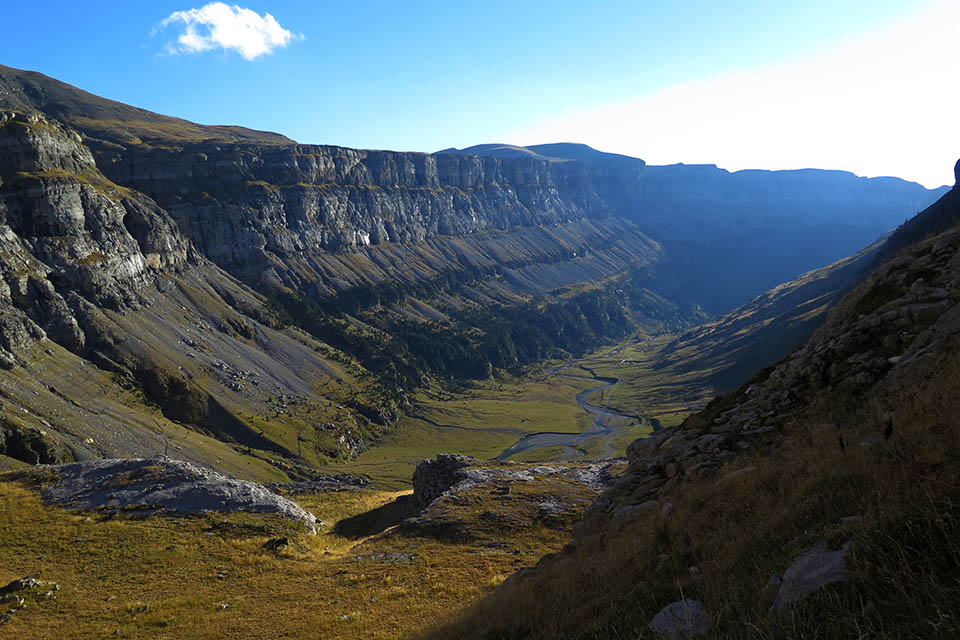 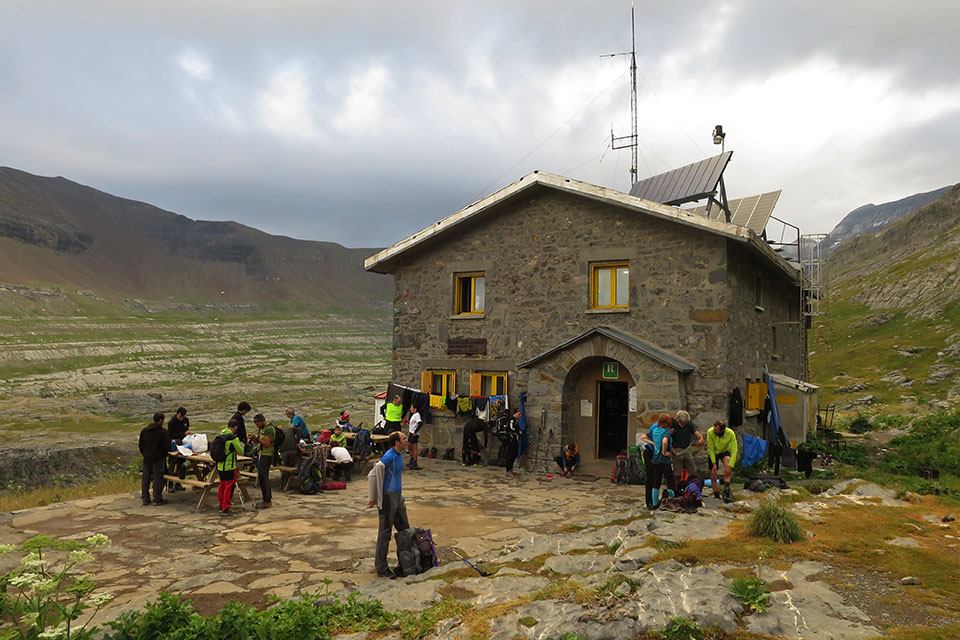 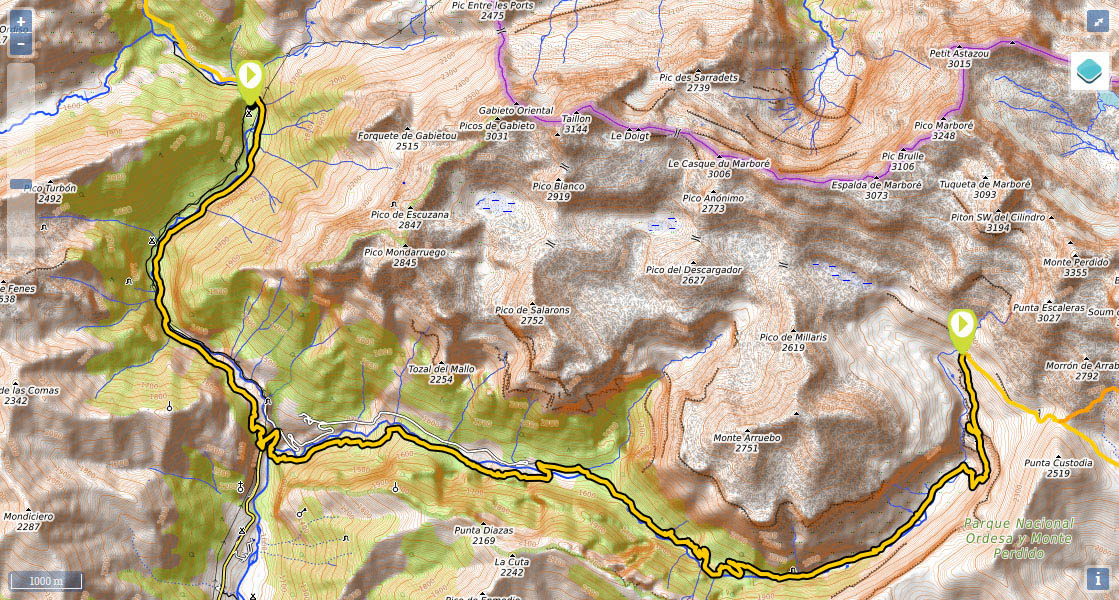 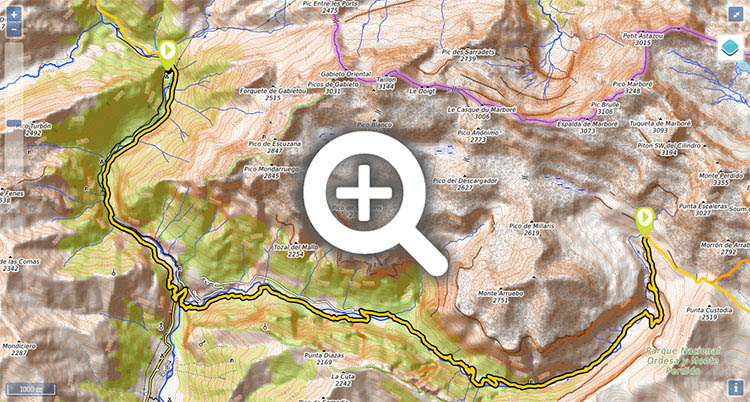