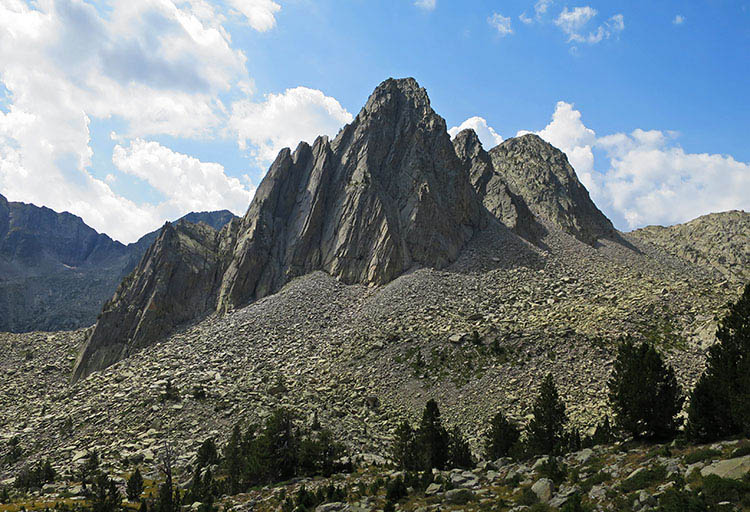 Those who feel up for it can crown this stage with a climb to the Tuca d'els Escorbets (2,904m), which can be reached without too much difficulty despite its impenetrable appearance. From the col at La Plana, follow the cairns up the right-hand side of the ridge (west face) until you reach the top. Once over the other side, walk in a horizontal direction (somewhat aerial) below the long peak ridge. The summit is by the last cluster of rocks. You climb up with the assistance of your hands. (1h25min up and down).

You are at the Ángel Orús auberge, the starting point of what can be considered the main way up to the second-highest peak in the Pyrenees, Pico Posets or Punta Llardana (3,369m). The relative simplicity of the route that climbs up via the Canal Fonda, also known as the "Ruta Real", make this auberge a hugely popular spot for those who hope to add a Pyrenean colossus to their CV.

The route this stage follows coincides at the beginning with the main ascent to Posets – where the vast majority of overnighters are headed – and on to Estós auberge it also forms part of the Vuelta al Posets or Ruta de los 3 refugios. From the auberge terrace you can make out almost the whole of the first part of the stage to the col at La Plana. The lake at Eriste/Grist is hidden above the second barrier of waterfalls in the Barranco d'els Ibóns, and the lake at La Plana occupies the area that from the auberge you see as La Plana Pass.

(0h0min;0km) Refugio Ángel Orús (2,150m). Retrace your steps of the previous day to the GR11.2. To this end, climb the waymarked path that leaves the auberge in a northwesterly direction, sharing the way with those walkers heading to Posets.

(0h35min; 1.1kms) GR11.2 path (2,360m). You leave behind the path of the previous stage to the Forqueta pass, Viadós auberge and Posets, and take the right-hand fork, to La Plana pass and Estós auberge. The path crosses the Llardaneta torrent and continues along the hillside – in a general downhill direction – to the Cabaña de Llardana. Still following the hillside – crossing a few streams where you can get water - you walk towards the Barranco d'Els Ibons without actually reaching it. The path heads up the left flank of the ravine (Pleta de la Plana) until it comes to just below the...

(1h20min; 2.9kms) Ibón de Eriste/Grist (2,400). You cross the ravine. The path heads south for about 6 or 7 minutes before veering left (east) to take on the main climb of the stage to the lake at La Plana, which you skirt round the left shore.

(2h05min; 4.5kms) Collado de la Plana (2,702m). Between Tuca de Mincholet (2,865m) and Tuca d'els Escorbets (2,904m). The path heads down to Basetas de Perramó, an area of glacier origin that is dotted with lakes. Head to the left (N), leaving the renowned Agulla de Perramó to the right – from here it does not look so impressive – and descend the steep slope down to the...

(2h55min; 6.2kms) Ibones de la Aigüeta de Batisielles (2,345m). Leave them on the left and continue to descend. It is now that the Agullas de Perramó can be appreciated in all their glory. With the emergence of the first pine trees, a path appears on the right that leads down to the Ibonet de Batisiellles passing the lakes at Escarpinosa – one of this stage’s options, that visits one of the park’s most popular photo opportunities.

(3h25min; 7.2kms) Ibón Gran de Batisielles (2,220m). You leave it to the left. The path crosses the stream where the lake waters run off, and heads into the pine forest, where it takes a steep descent to the...

(4h00min; 8.5kms) Ibonet de Batisielles (1,890m). A pretty lagoon in the middle of the pine forest with the Agullas d'Ixeia as a backdrop. At this point, the GR11 converges with a busy tourist trail (S3) to the Escarpinosa lakes. If you decide to head on to San Jaime bridge on the same day, the best option is to follow this path (S3) to Santa Ana cabin. If you decide to walk on to Estós auberge, you will need to follow the red and white GR11 markings that pass by a cabin.

- The Estós Opction. If you follow the official GR11 trail, you will continue along the path that passes by the cabin and heads up along the hillside through a dense pine forest. Throughout this section to the auberge at Estós, you will cross a number of streams. After 10 minutes, the path comes out at a clearing where suddenly the south face of Perdiguero (3,222m) appears – with a 1,500 sheer drop over the valley of Estós – next to other less well-known three-thousand-metre mountains in the area. The path heads back into the pine forest. It heads gently up the left flank of the valley until it comes out opposite the auberge, at which point it rapidly drops down to cross the river.

- The shortcut option via the S3 trail. If you take the trail (S3) from Escarpinosa lake, you will descend through a dense pine forest until you come to the track that runs along the valley of Estós. Approximately 1.2kms from Cabaña de Santa Ana.

(5h15min; 12.4kms) Refugio de Estós (1.900m). The path continues downhill past fields and pine forest until after about 35 minutes it comes out at a plain where it crosses the river.

There, unsuspectingly, sits the Cabaña del Turmo which many will recall thanks to the legendary song “20 de abril del 90” by Celtas Cortos. ¿Recuerdas aquella noche en la cabaña del Turmo, las risas que nos hacíamos antes todos juntos?(Remember that night in the Cabaña del Turmo? The laughs we all used to have together?) ... Apparently the song is not inspired by real events, but it must be the cabin they made reference to. Find out more.

You pass a fence and now follow a track. Soon afterwards, you are advised to take a left turn (shortcut), indicated by a sign as Gorgas de Calantes. The path passes a series of panoramic viewpoints over something that looks like cooking pots, carved out by the river whenever it finds a cascade. You rejoin the track. After 25 minutes you reach the Escarpinosa lakes, 5 minutes later you pass a drinking fountain and another 10 minutes later you reach the...

(6h45min; 18.5kms) Cabaña de Santa Ana (1,495m). In good condition. You keep walking downhill. At the Palanca de Aiguacari the track crosses over to the other side. Later on, you leave the small reservoir of Estos below to the right, and soon afterwards, you come to the road between Benasque and Los Llanos del Hospital, where the stage ends.

At the beginning, Refugio Ángel Orús (/).

During the stage, before Grist lake, Cabaña de Llardana (poor condition, 2-3 people, part of the roof is missing). At the ibonet de Batisielles there is a cabin for a maximum of 4 people. The roof is in decent condition but the floor is made up of earth and the door is missing. After that, you have the Refugio de Estós (/) and close to the end, the Cabaña de Santa Ana (free, good condition, 2 rooms, 20 places).

At the end of the stage Camping Aneto, Camping Ixeia and Hostal Parque Natural.

In Benasque, 3km away from the route, you will find a choice of accommodation. We recommend Hotel San Antón (//) (with restaurant). 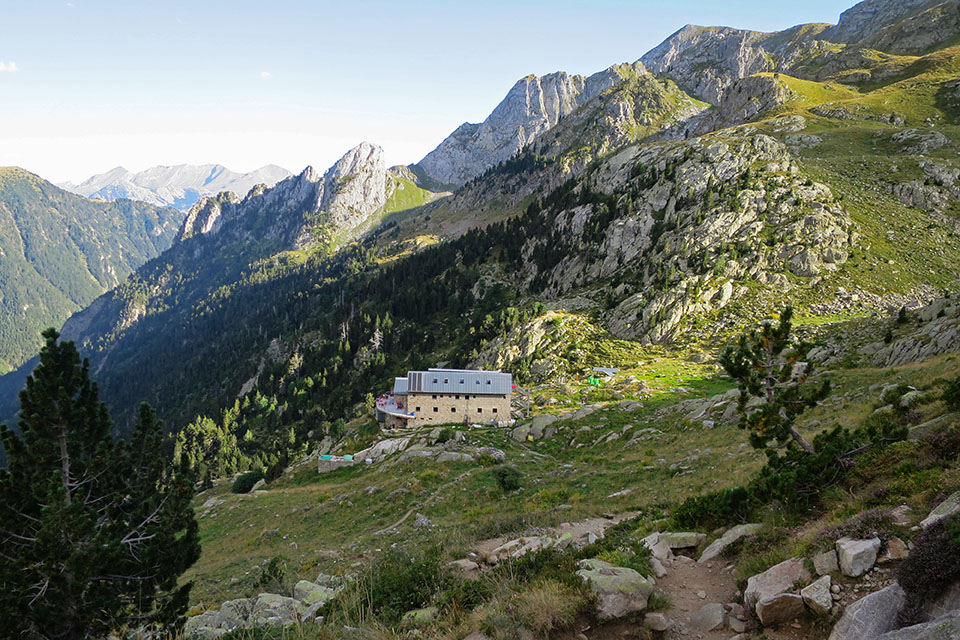 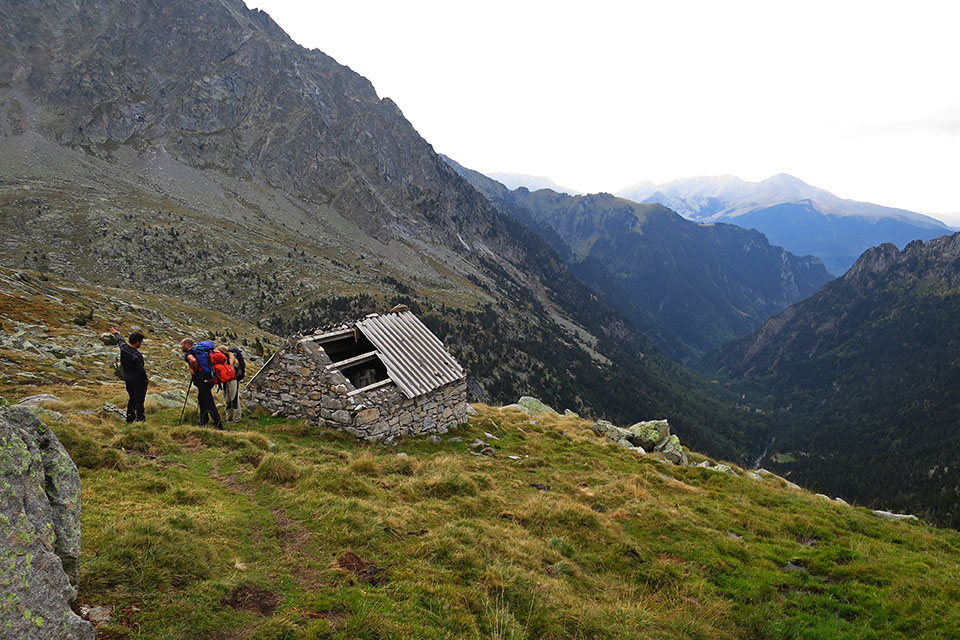 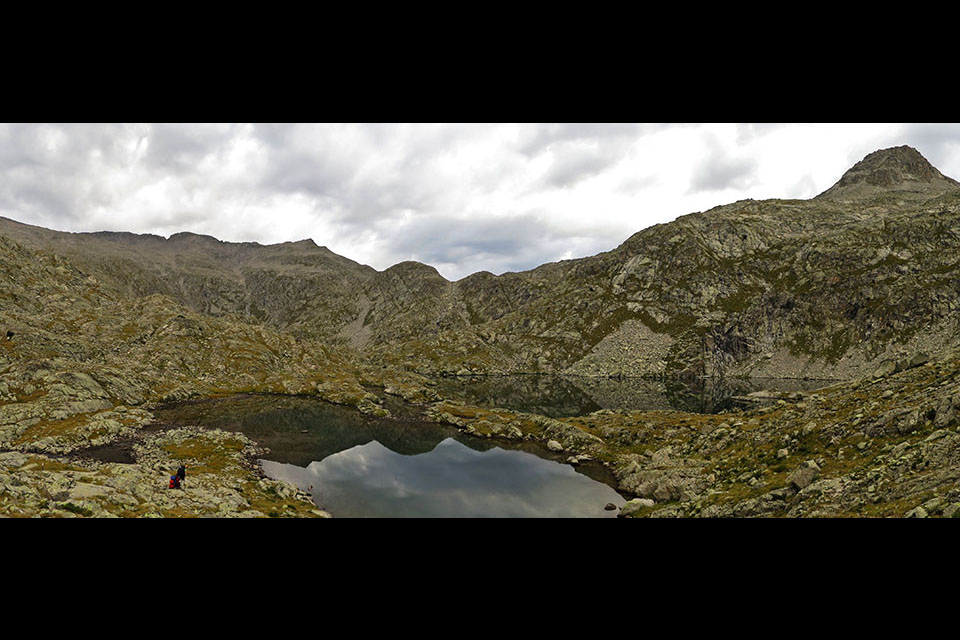 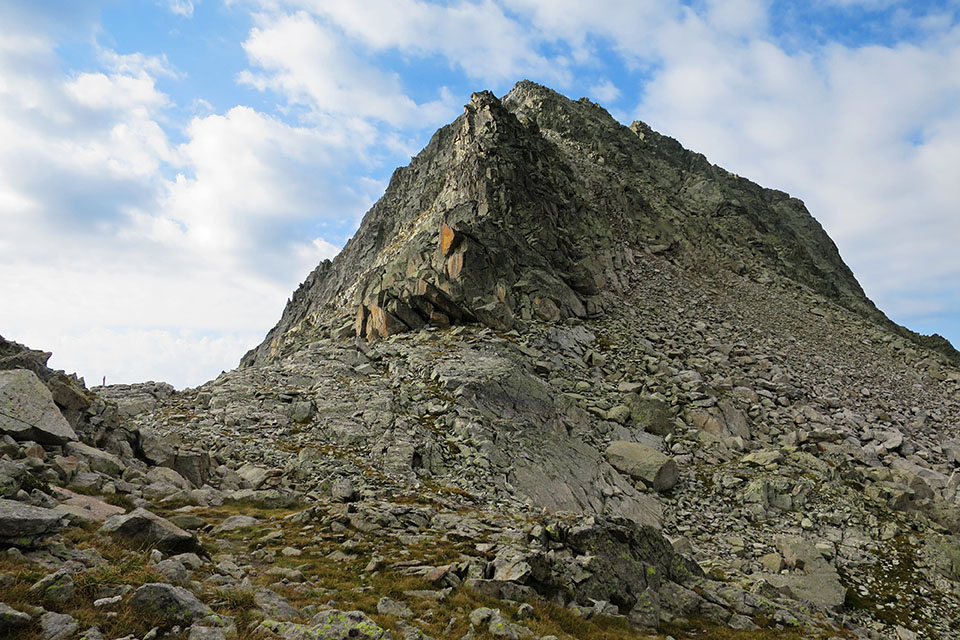 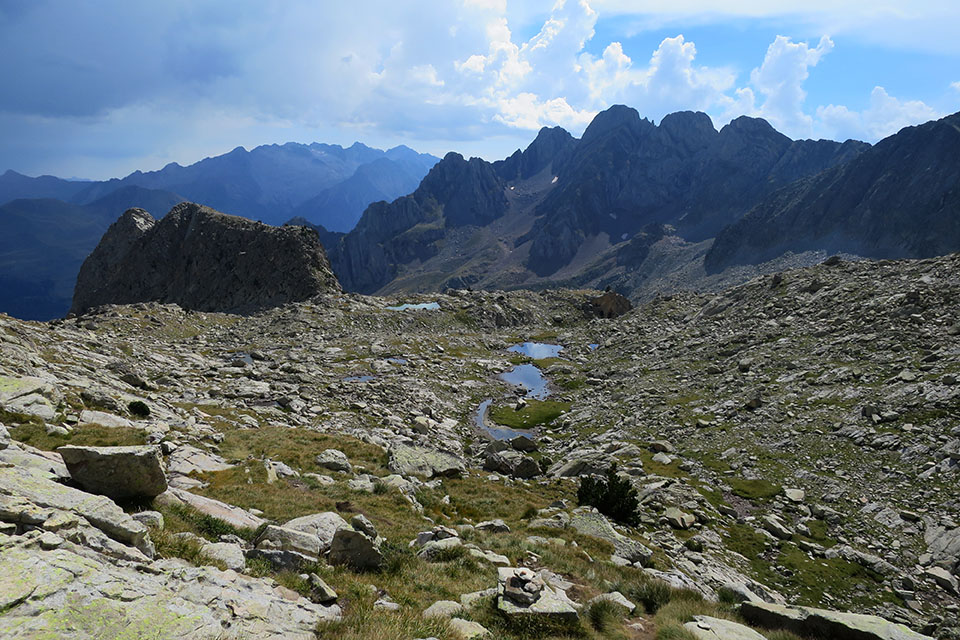 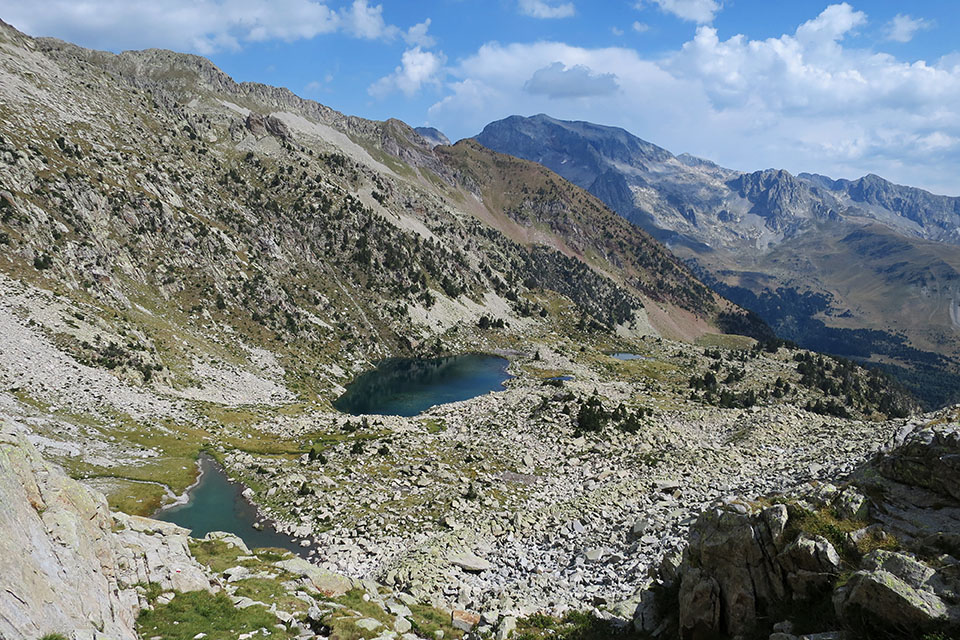 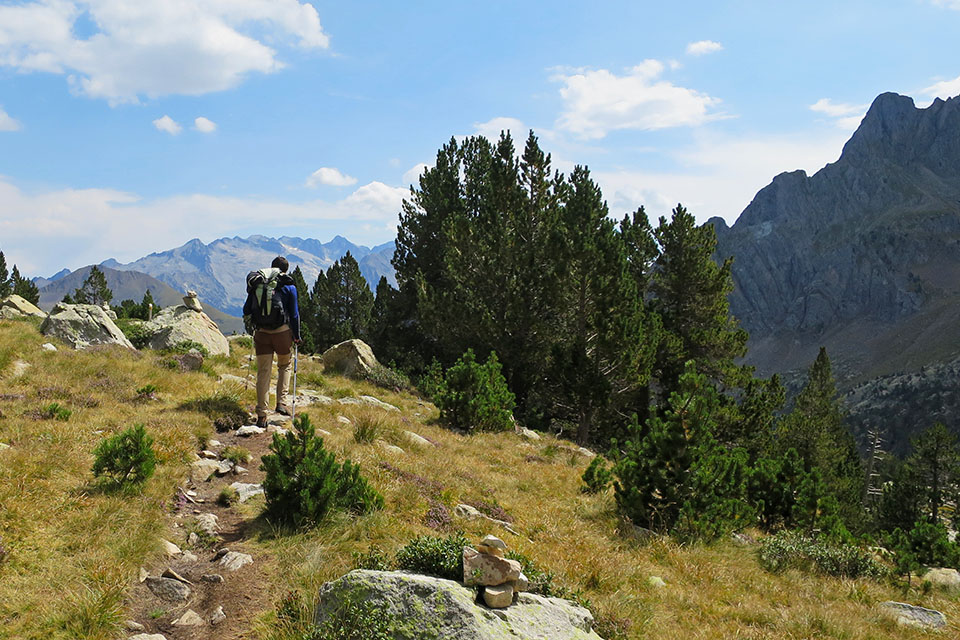 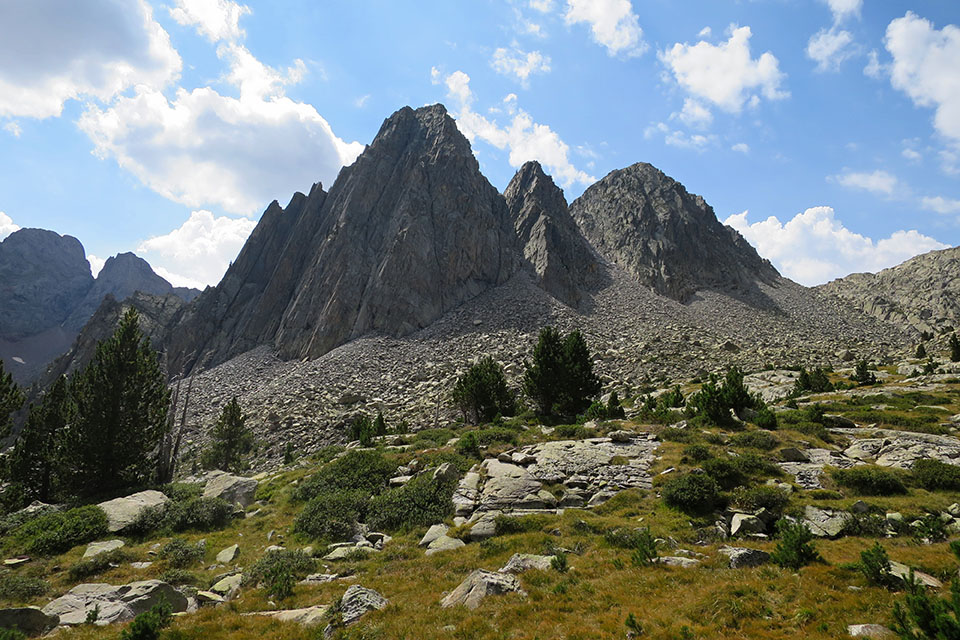 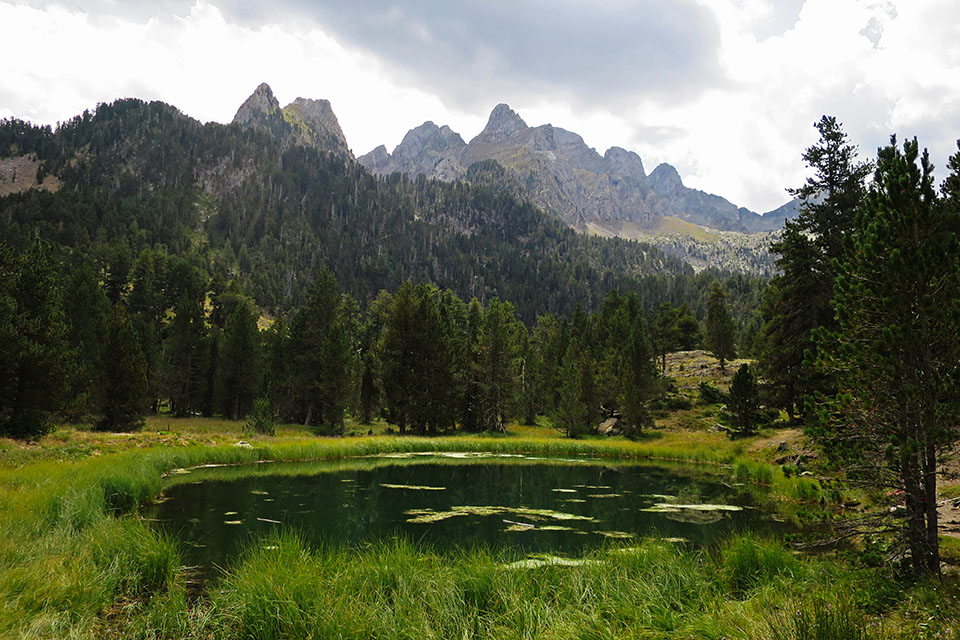 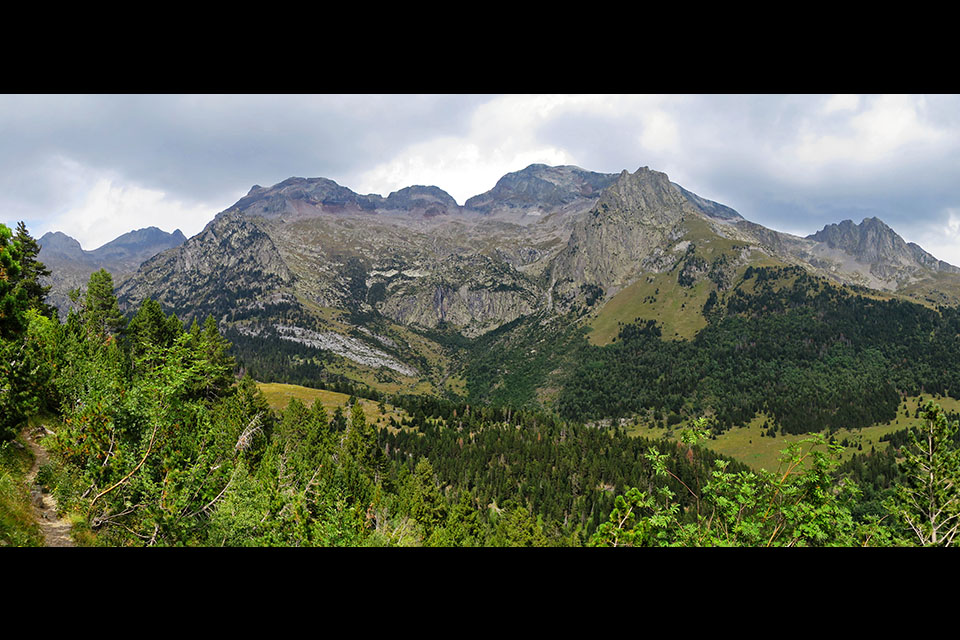 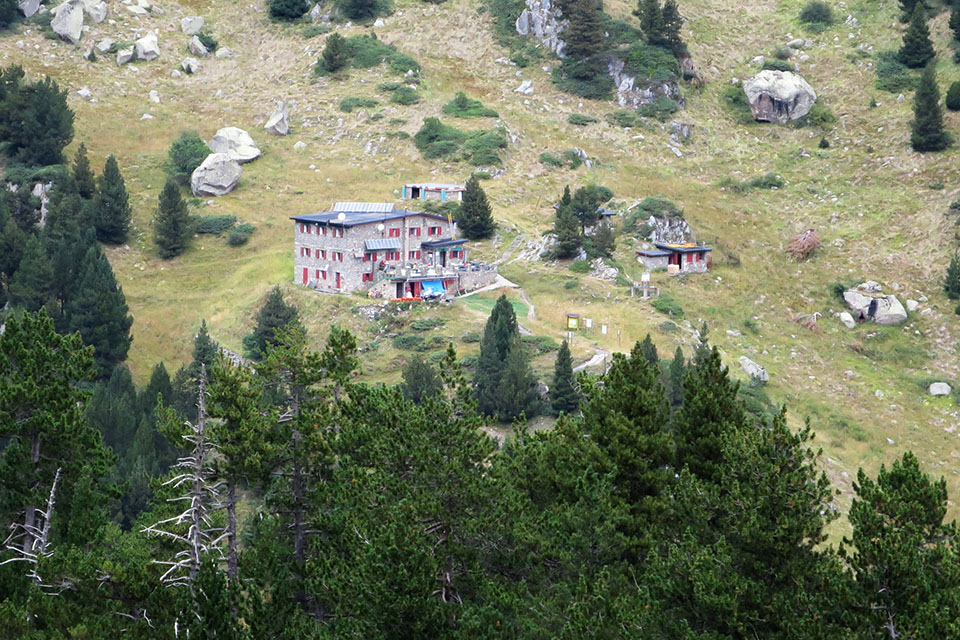 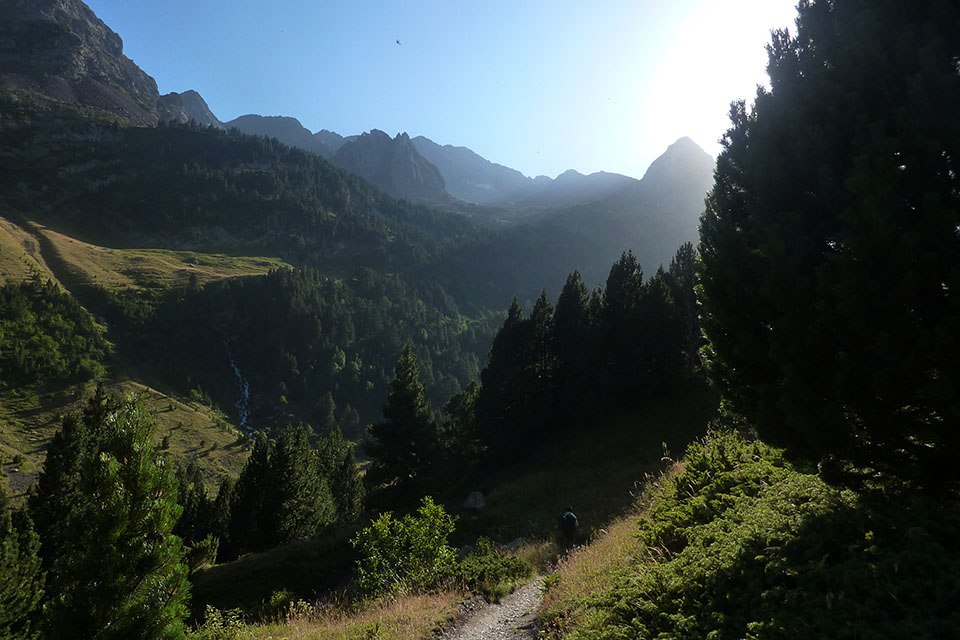 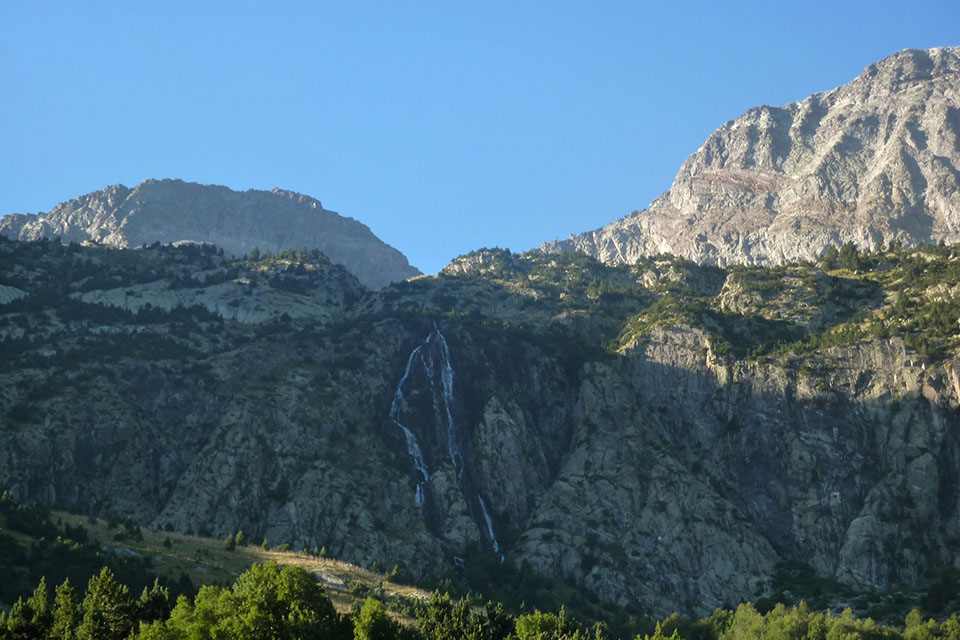 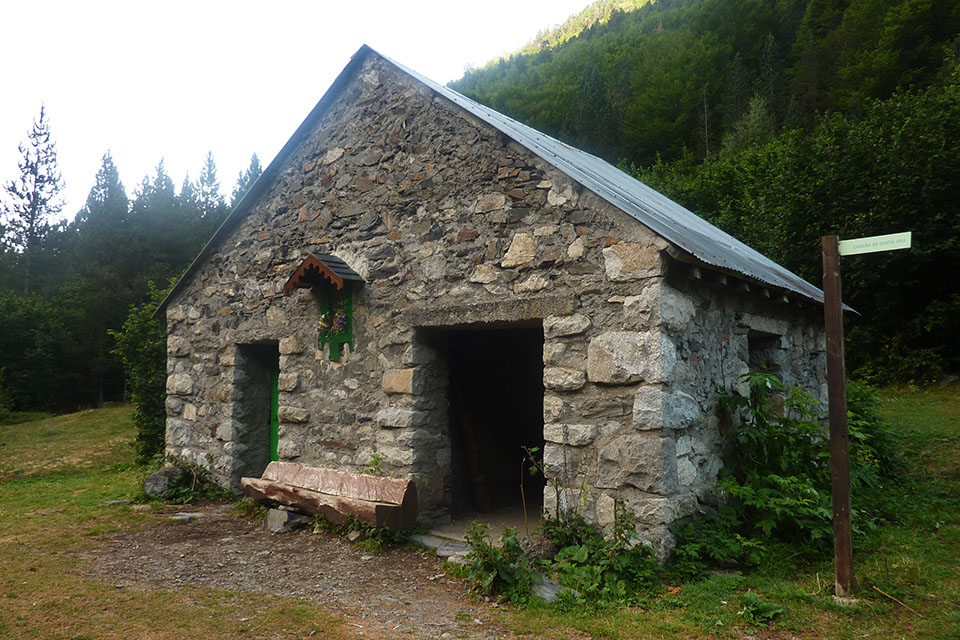 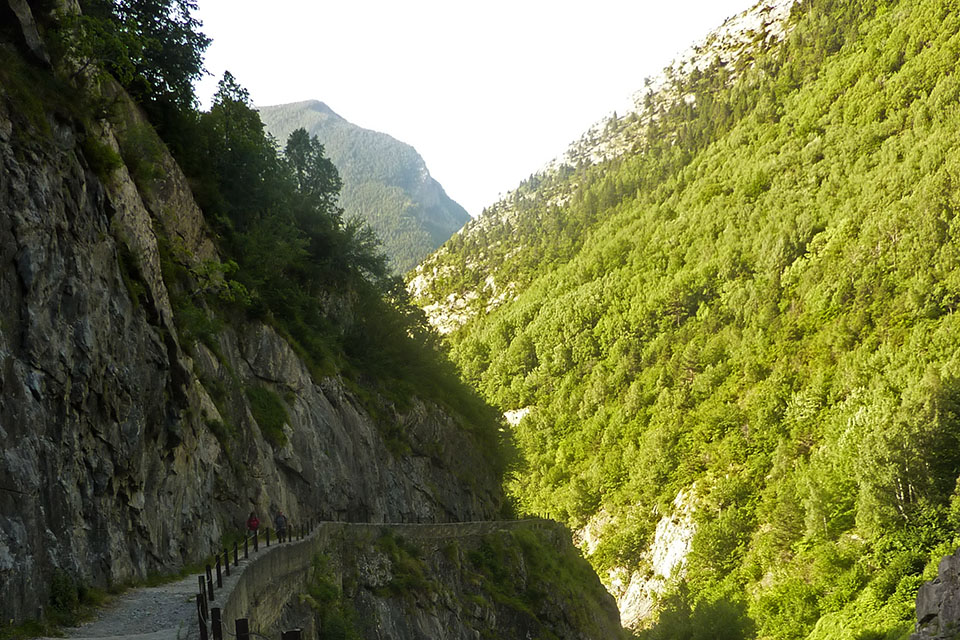 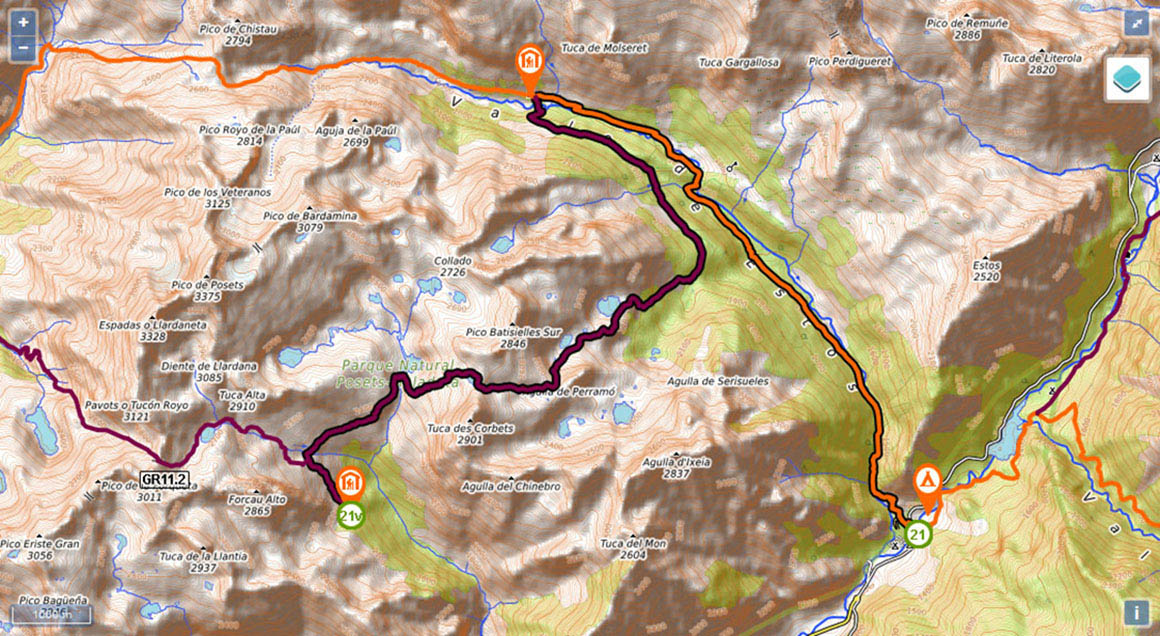 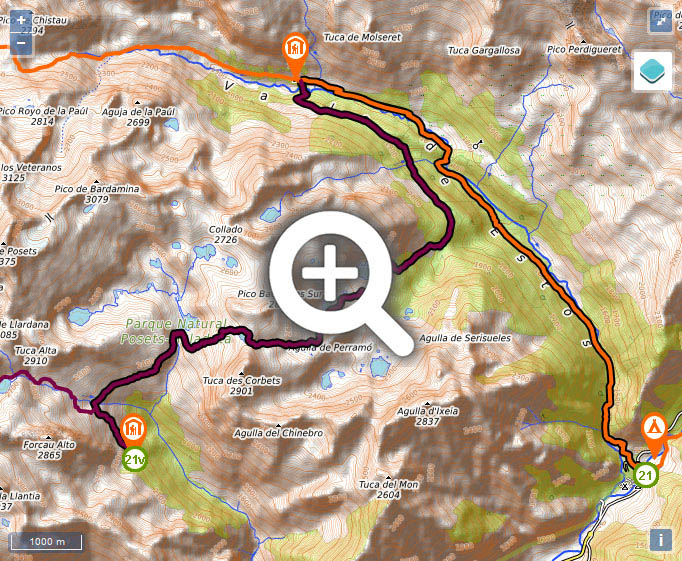